Mr. Carvallo is a first year teacher with Oro Grande School District but he has already earned the respect of his students and colleagues. He teaches Spanish 1 and implements hands-on student-centered learning that is rigorous and meaningful. His energy and engaging lessons have his students fully engrossed during class time discussions. He is the definition of making learning fun while challenging his students to push beyond the shyness and awkwardness that often comes with learning a second language.

After serving his country as an intelligence office in the Army, German decided to take on teaching as a second career.  He chose to teach Spanish after teaching adults in the Army and assisting in his family’s fruit import business where he found the need and skills for a bilingual education.  Outside of the class room, his love of soccer is something he shares with many of his students as he is often seen playing pick-up games with them at lunch. Additionally, he enjoys coaching his own children’s youth teams. He and his family reside in the nearby community of Helendale.

“German is clearly passionate about providing students with the necessary skills to learn a second language,” Assemblyman Obernolte said. “Spanish is an important and useful tool to have living in California. It’s refreshing to know he is not only well respected but also makes learning fun for his students. It is my honor to recognize German Carvallo as the outstanding teacher for the month of March.” 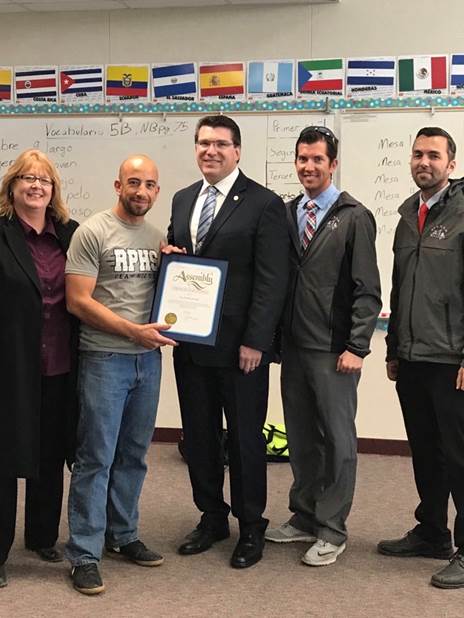