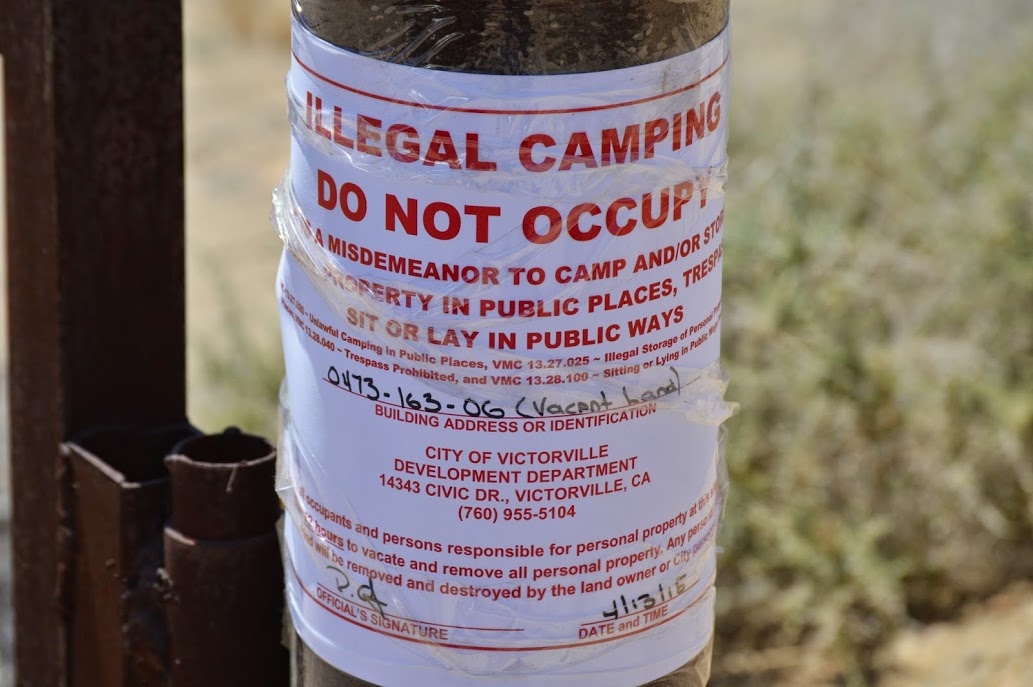 VICTORVILLE-(VVNG.com): The exodus of the homeless that once resided in the Mojave Riverbed area, no matter who is viewing it, is a heart wrenching sight.  These people in the opinion of many, have the least amount of material things or even lack of other viable housing options. Others in the community see the enforcement of trespassing laws, as something that is long over-due.To them the serious crime in the area, sanitation problems and the massive use of resources for the county, were a cause of major concern.

On Sunday, April 12th, less than 24 hours prior to their eviction deadline, there were still several residents packing and even a few that seemed unconcerned with the approaching deadline. The move was one that the people living in the area were made well-aware of by Sheriff’s deputies  since mid December.

The San Bernardino County H.O.P.E. Programs and Behavioral Health, along with other organizations, have been offering resources and assistance to the residents for approximately a year. On Tuesday, April 13th, the day following moving day, about seven travel trailers along with six other vehicles were on the pavement just outside of the recently placed and newly locked gate to the access road. Somewhere between 10-15 people were in the area, many hiding from the camera view due to the fact that some parolees.

According to Detective Pahia, of the over 70 people originally counted in the riverbed area, only a small portion came to the H.O.P.E. outreaches. At the outreaches they were put in contact with mental health services, given medical services and were given resources for several different forms of housing. Some were given rides to the social security offices to replace lost cards at some points. “We can not force people to take these services and it is not an overnight process. It is a lengthy process, some have been on the riverbed for 10 years. We understand that some can not make that jump quickly back into society. Sometimes we are met with resistance or skepticism, we want them to know that we will continue to offer them serviceS” added Pahia.

Back in December, when the program gave a set March 2015 deadline to get out of the Riverbed area Victor Valley News reporters had the opportunity to speak with

Michael Ray Grabhorn from the San Bernardino County Department of Behavioral Health.  Grabhorn told us, “The hardest thing for people is the unknown. If they are living there they know what to expect from day-to-day. If they decide to leave, they have no idea what will happen and it’s scary. That’s why we work with love, because we have to reassure them and make them feel cared about and that we will protect them.”

When Victor Valley News reporters spoke with two former residents on Tuesday afternoon, they spoke with us of their concerns.  Richard, the former resident shared that they believed that they were able to move to the other side of the freeway, near the Shady Oasis Kampground on Stoddard Wells. When they moved there, the signs moved there the same day and according to Richard, some were told they had 24 hours to move and some were told they had 72 hours to move from that location. Those individuals that made this tedious move, considering their circumstances felt mislead. Some organization, church and ministry leaders, that only received responses from these former residents acted out in outrage feeling as though these people were misled by the Sheriff’s H.O.P.E. (Homeless Outreach Proactive Enforcement) team.

Detective Reggie Pahia said that since the Riverbed area is such a large area, they had to close it a portion at a time. According to Pahia, the new action taken to move the people from the other side of the freeway is something that is being done due to it being private property and code enforcement going in giving them the 72-hour notice  that they can not be on private property.

The owners wanted that area closed, which consequently lead Code Enforcement to enforce the set trespassing laws. As far as resident rights, for the few that did reside there for a longer period of time Pahia said, “Code enforcement would have to enforce that, we would like to see them given the same amount of notice, but we did have contact with all at the riverbed and they did know it was coming” .

On a positive note, Pahia also mentioned that a former resident of the riverbed area  had an appointment at the Transitional Assistance Department today and was set to receive his voucher for housing today. “H.O.P.E. team outreach will continue in the interest of linking homeless with services, with the primary focus being transitioning them from homelessness,” added McCoy.

According to the April 15th San Bernardino County Sheriff’s press release, approximately 25 people who had been unlawfully camping in this private property section of the riverbed left voluntarily, removing approximately 15 RV trailers with them. Four vehicles were towed from the riverbed and one subject who refused to leave was arrested for trespassing.

With the closure in effect, the collaborative effort will shift to maintaining enforcement of the closure and removing the large amounts of trash and debris that had been collected and left behind by the homeless population. The existing condition of the riverbed, with its extensive sanitation, biohazard and trash issues, will be the primary focus now moving forward with the pending clean up, with the goal being to restore this area back to its previous beauty.