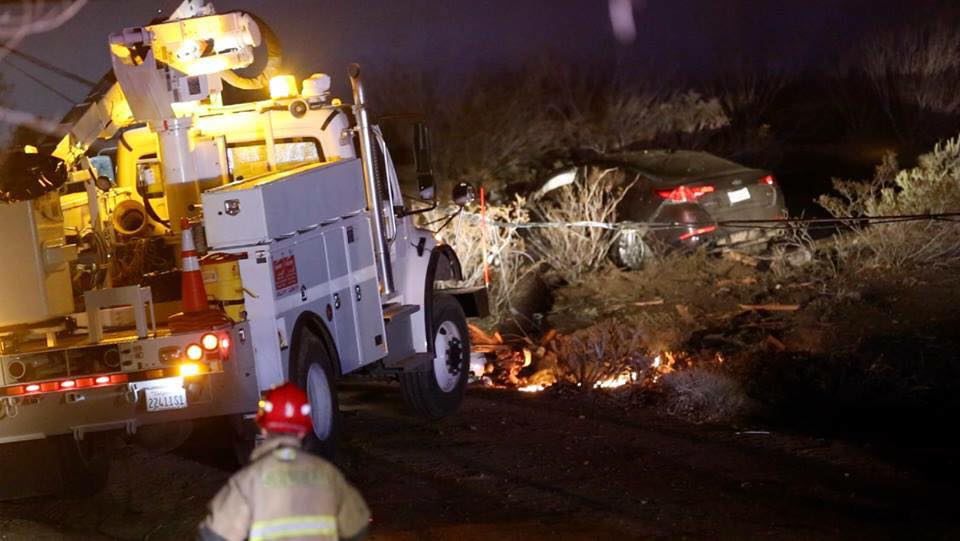 VICTORVILLE-(VVNG.com): On Friday, December 19th Sheriff’s dispatch received a call at approximately 9:00 PM reporting a vehicle that appeared to be stuck near Arlette and Kimberly Drive. The vehicle, with paper plates was identified by the vehicle Identification number as a stolen vehicle.

Earlier in the day the registered owner reported seeing his stolen vehicle stuck in the mud and on top of a boulder. Police made contact with the owner and he explained to the officer that he had not approached his stuck vehicle due to becoming suspicious about another vehicle with two individuals who were near his vehicle. While at the scene speaking with authorities the owner of the stolen vehicle pointed out a passing car, identifying it as being the same vehicle that had been near his car when he had seen it earlier that day.

The deputy attempted to make a traffic stop on the black 4-door newer model Kia and although the vehicle did stop, the driver was not cooperative in opening the vehicle window. The deputy drew his gun and the driver sped off eventually leading to a brief pursuit. The suspect drove down a dark portion of Seneca Road and turned his headlights off. Moments later the vehicle collided into a power pole in the area of Seneca Road and Cobalt Road. A transformer came crashing down creating a bright flash that could be seen by people all over the Victor Valley. Oil from the transformer caused near by vegetation to catch on fire.

Terence Dominic Williamson, 22-year-old Victorville resident fled from the scene and was located less than a mile from the collision by the Sheriff’s Helicopter facilitating it’s thermal camera.

Approximately 2,400 households were left without electricity due to the collision. Southern California Edison had power restored for all those affected just after 3 am on Saturday, December 20th.

Williamson was arrested on evading a police officer with disregard for safety as well as auto theft and resisting an officer. Williamson appeared at the custody arraignment on Tuesday, December 23rd via county jail video. The defendant plead not guilty to all charges and is being held at Adelanto Detention Center  in lieu of $50,000. His next appearance is the pre-preliminary hearing which is scheduled for Monday January 5th in San Bernardino County Superior Court in Victorville.