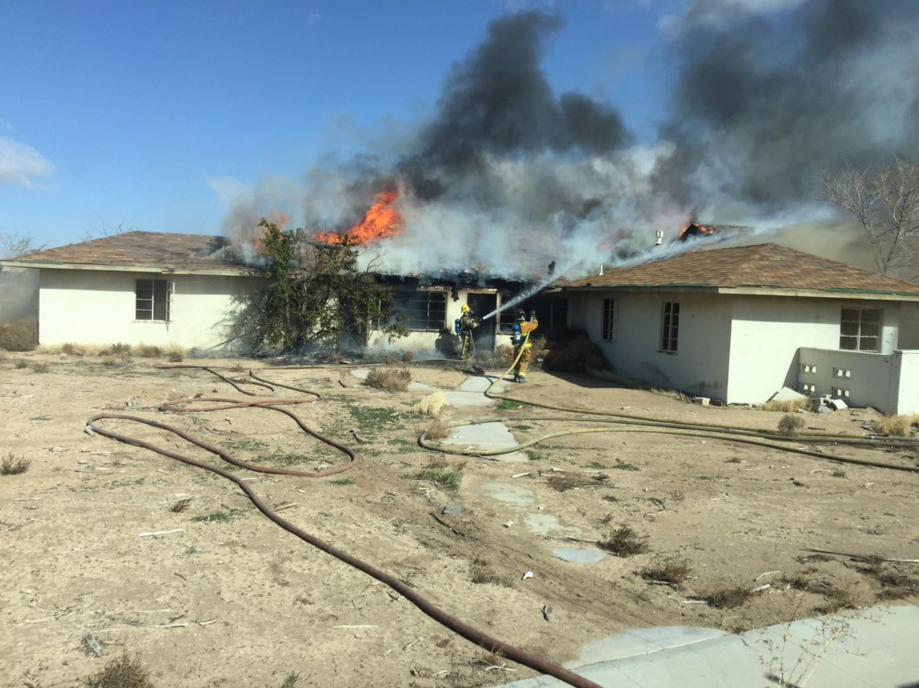 VICTORVILLE-(VVNG.com):  Recent fires at the Old George Air Force base near Air Expressway and Nevada Avenue in Victorville are suspicious in nature according to the San Bernardino County Fire Department officials.

On Monday, February 1, 2016, at 10:26 a.m. firefighters were dispatched to a 2nd alarm fire in the area of George Boulevard and Nevada Avenue. Upon arrival, they found that two structures, about a block apart both well-involved with smoke and flames showing. These fires were the third and fourth fire within the past month, with the two previous being on January 18, 2016, and January 22, 2016.

The structures, now abandoned, were once the multi-family living quarters to service members in the US Air Force.

A total of 61 firefighters responded to the fire, including one crash truck, 6 fire engine (one from the Apple Valley Fire Protection District), one truck company, one brush patrol, three water tenders, two hand crews from the County Fire Camp 6, three chief officers and three investigators.

A CHP helicopter was called to the area to conduct aerial search looking for a gold or brown  sedan, that according to San Bernardino County Fire Department officials witnessed leaving quickly from an area near the scene of the fire.

The vehicle was later stopped after driving approximately 70 miles per hour in the area near Village Drive near Air Expressway. San Bernardino County Sheriff’s Spokeswoman, Mara Rodriguez told Victor Valley News that one suspect was detained and an arson investigation is being conducted.

There were no injuries reported as a result of the fire. San Bernardino County Fire Department Public Information Officer, Eric Sherwin told Victor Valley News that the cause of the fire remains under investigation and the estimated damage is still to be determined.

Despite the high winds, firefighters were able to extinguish both fires without any additional spread to any other structures or nearby vegetation in just over hour.