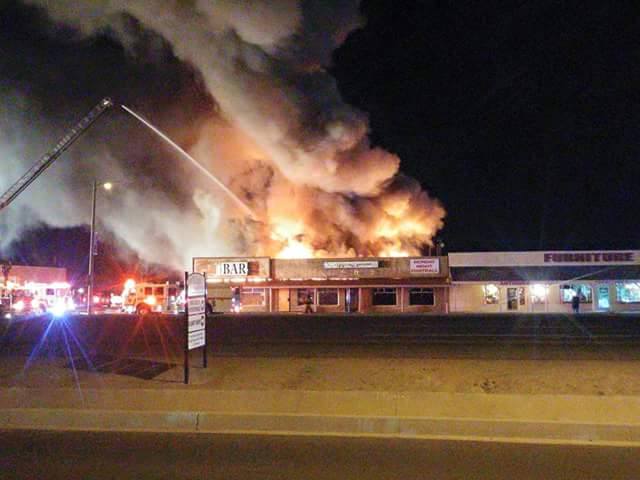 When Apple Valley Fire Protection District firefighters arrived on scene just minutes following the report they witnessed black smoke and flames showing from the upper portion of the building.

The 2nd alarm fire was determined to have originated from the back attic area of the building.  A life

hazard alert was issued due to downed power lines that reportedly collapsed onto the the building. Southern California Edison and Southwest gas were called to the scene to assist in securing the utilities.

The Tipping Point Bar had a grand opening on October 4, 2014 and by early November 2014 they were closed for “remodeling” at which time they did not reopen.

“My husband is there now. He said there was just an explosion, probably gas lines he said!”, stated Deborah Jeffries Aragon, on a Victor Valley 411 Facebook group post.

According to scanner traffic, justt before 11:00 p.m., shortly after a partial roof collapse, the tactics switched to defensive mode. The life hazard alert was lifted at 11:38 p.m., while the fire continued to burn.

The total cost in damages caused by the fire is currently unknown. No injuries have been reported.