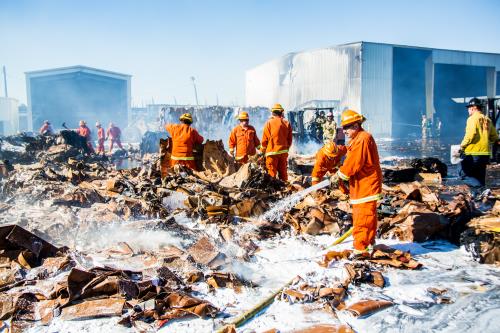 Firefighters responded to a 3rd alarm commercial fire at the Fontana Recycling Center, located at the 14900 block of Slover Avenue in Fontana on January 16,at about 9:39 a.m.

Initial reports stated a bundle of cardboard was on fire to the north of the large butler building. Employees tried to put out the fire using fire extinguishers, however strong winds quickly spread the fire and employees were forced to evacuate.

Upon firefighter arrival less than 5 minutes later, the fire driven by 25 MPH winds gusting upward to 50 MPH, had spread to the butler building and several other bundles of cardboard and embers were blowing upwards to ¼ mile away, starting additional fires.

Firefighters quickly sprung into action putting out spot fires and aggressively attacking the fire utilizing all available resources. Explosions could be heard coming from a diesel storage container, moments later live power lines tumbled to the surface, hindering firefighting efforts. Firefighters continued to battle the blaze and extinguish numerous new fire starts. Embers started a spot fire on the other side of Slover Ave., catching vegetation on fire and putting that business at risk. Embers also caught fire to a wood fence to the back side of a residence.

Firefighters kept the fire from spreading to the home. Firefighters were successful in saving hundreds of thousands of dollars in machinery, several buildings, vehicles and semi-tractor trailers, as well as construction equipment.

A civilian from an adjacent property was treated by County Fire Firefighter/Paramedics and transported by American Medical Response to Kaiser Hospital for smoke inhalation. There were no injuries to firefighters.

Fontana Police Officers closed Slover Avenue from Hemlock to Live Oak while fire crews battled the blaze. The cause of the fire remains under investigation by San Bernardino County Fire Investigators.

Additional fire crews were readily available to respond to the incident as County Fire had augmented its daily staffing due to the red flag warning; providing critical resources immediately.

San Bernardino County Fire Hand Crew 40, along with the County Inmate Hand Crew (Glen Helen 1) responded to the business for overhaul and mop up operations, relieving firefighters and medic engines to return back to service. Numerous bundles of cardboard and other materials have to be broken up to make sure all fire is extinguished. Crews are expected to be on scene for several hours.

Residents are advised to use extreme caution and be prepared in the event of a fire. County Fire urges you to take action now in preparing your home and surrounding area. With advance planning and preparation, you can dramatically increase your safety and the survivability of your property.

Visit : www.sbcfire.org/fire_prevention_advice.aspx to learn how to make your home defensible against fires.

The Ready! Set! Go! Personal Wildfire Action Plan gives you the tips and tools to successfully prepare for a wildfire. 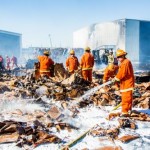 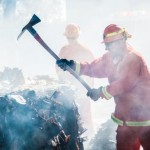 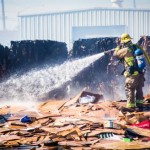 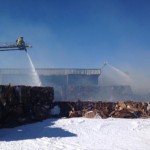 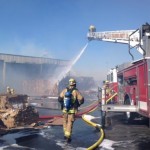 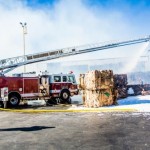