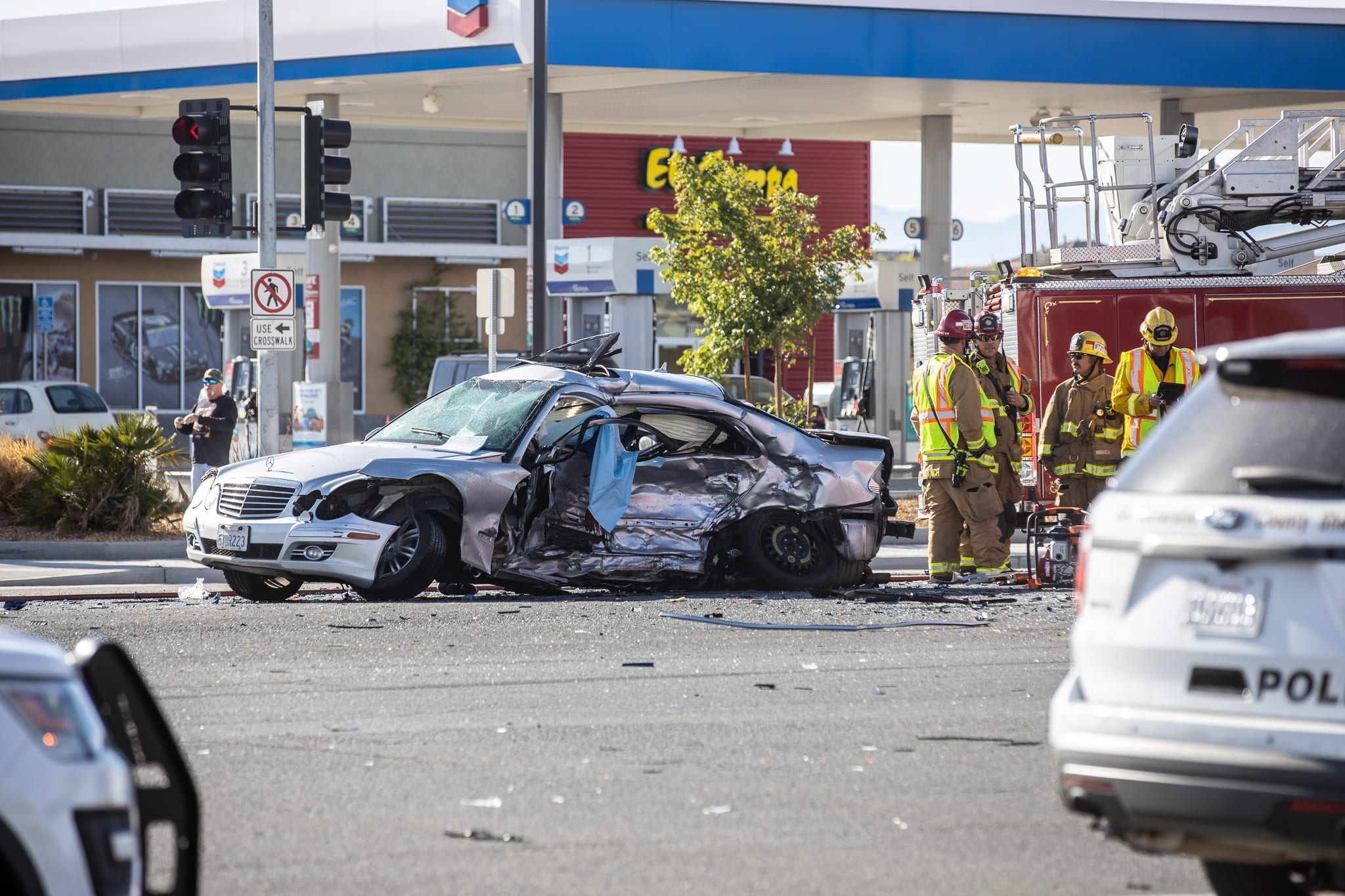 VICTORVILLE, Calif. (VVNG.com) — An innocent woman was killed after a man fleeing from a minor fender-bender crash ran a red light, killing himself and another driver Saturday morning.

Victorville City Fire, San Bernardino Sheriff’s Deputies, and American Medical Response were summoned to the call that was reported with one person trapped.

Upon arrival, they located a silver 2007 Mercedes Benz with major driver-side damage and a 2018 blue Honda Civic.

Emergency personnel declared the driver of the Mercedes, a Black female adult, deceased on scene. The male driver of the Honda, unknown age or race, was also pronounced deceased.

A Mercy Air helicopter landed on Highway 395 to transport a female passenger from the Mercedes to a trauma center. She was conscious but in critical condition.

As a precaution, officials searched the nearby fields to ensure there was no child in the car that may have been ejected.

According to Michael Stipo, a resident of Adelanto, he was first hit by the driver of the blue Honda at the intersection of Palmdale Road and Highway 395.

Stipo told Victor Valley News that he was on his way to work in his white Dodge Challenger eastbound on Palmdale waiting for the red light when he was rear-ended.

“I gestured to him to pull over, and it appeared to me that he was going to pull over, and then he made a right on to the 395 right here,” stated Stipo. “I took out my phone to record it to get his license plate.”

Stipo captured the moment the horrific crash happened on his cellphone.

“I got close enough to get his license plate number when we were coming up to this intersection, I started backing down when I saw the light was red, and that when I saw him collide with the Mercedes,” stated Stipo.

The cellphone footage captured by Stipo, which was reviewed by a Victor Valley News staff member, shows the driver of the blue Honda driving southbound on Highway 395 driving recklessly, and lane straddling.

In the video, Stipo remained a safe distance from the driver of the Honda as they first approached the signal light of Dos Palmas Road and Highway 395.

Then, as the hit-and-run driver continues to the next intersection, Stipo witnesses the signal light at Highway 395 and Palmdale Road turn red for his direction of traffic, slowing down even more. That’s when the driver of the southbound Honda t-boned the Mercedes that was eastbound on Luna Road.

Sheriff’s officials said the road is expected to remain closed for several hours for an investigation.