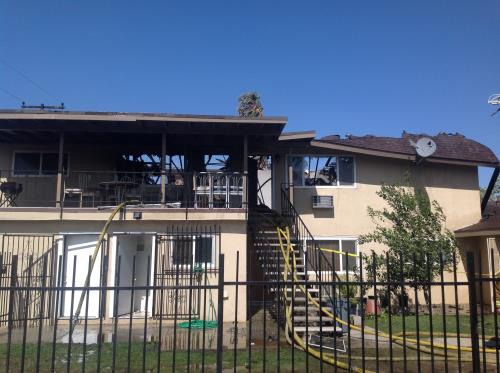 [googlemap src=”” align=”alignright” ]FONTANA: What started off as a small fire on a balcony, quickly turned into a fire that consumed the 2nd story of two adjacent apartment complexes in Fontana. At 9:07am a report of a balcony on fire was reported and a full structure fire assignment was dispatched to the 17200 block of Barbee Ave. The first on-scene unit reported one building with the second story fully involved with fire through the roof. They also confirmed that a neighboring apartment building to the west was also beginning to catch on fire.

Additional resources were immediately requested bringing a total of over 70 fire personnel to the scene. Four residential units were a total loss however firefighters were able to save two other units. One van was a total loss in the rear of the structure with an additional van saved by firefighting efforts.

At the time of the call winds were blowing steady at 40 mph, with gusts up to 75 mph in the area. This quickly spread the fire from one building to the other. It also started spot fires a block away in palm trees and a field. A major concern was keeping the fire from spreading to a neighboring vacant bowling alley. Firefighters were able to accomplish that along with quick extinguishment of all reported spot fires before they grew out of control. This was made possible largely due to the fact that the San Bernardino County Fire Department had increased staffing in place for the current Red Flag Fire conditions.

The cause of the fire was deemed to be from a carelessly discarded cigarette. Estimated loss from the fire is over 400,000 dollars. Red Cross was contacted to assist with the displacement of approximately 12 people. No firefighters were reported injured during this incident. Two civilians had minor medical complaints in which they were both treated and released on-scene. One dog was rescued by firefighters. Assistance was received by the Rialto Fire Department, Colton Fire Department and the San Bernardino City Fire Department.

The extremely windy weather conditions that we are currently experiencing can pose a multiple number of hazards. One of which is electrical emergencies. If you witness any transformer, electrical pole, or power line hazards, never approach them! Keep your distance and immediately call 911. 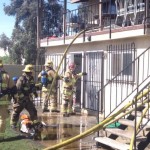 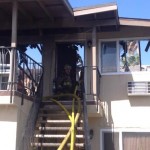 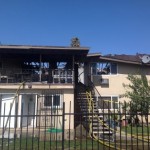 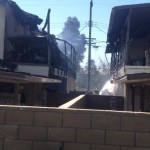 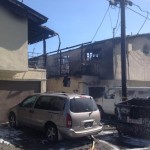 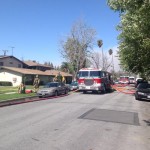