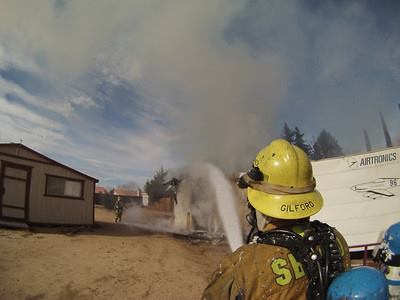 HESPERIA: At approximately 12:34 p.m., on January 28, San Bernardino County Fire received multiple reports of a fire in the 7100 block of Seventh Ave. in the City of Hesperia, with reports of a garage and home on fire. A first alarm assignment was dispatched to include 4 engine companies, a truck company, two medic ambulances and a battalion chief.

The first unit on scene found an approximate 30’ X 20’ detached garage engulfed in heavy smoke and fire. Firefighters aggressively began to fight the garage fire and slow down the fire progression to the home.

Firefighting efforts were hindered by exploding ammunition coming from inside the garage.

Fire resources on scene were able to confine the fire mainly to the detached garage although the home suffered some damage to an exterior porch and wall. A vehicle near the garage along with an enclosed trailer, were destroyed by the fire.

San Bernardino County Fire investigators were on scene at the time of this release and the fire is still under investigation.