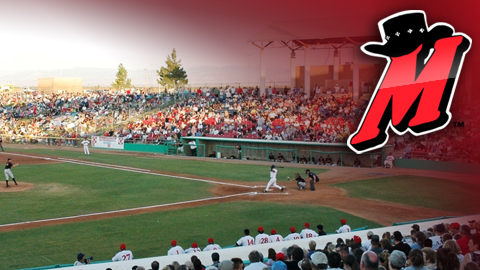 The homestand premieres on Nick Jr. Night, August 26, with a special appearance by DORA THE EXPLORER. Dora The Explorer will be available throughout the night for pictures and autographs. Along with this theme, the Mavericks will be wearing special Dora the Explorer jerseys during the game. A silent auction to take home one of the limited edition jerseys will take place in the concourse during the game. All proceeds from the jersey auction will benefit the Inland Empire United Way, Desert Communities Region. Friday also features the FINAL Family Feast Friday specials at the Mavericks’ Grill and Chuck Wagon concession stands, which offers $1 hot dogs, $1 bags of chips and $1 ice cream sandwiches all game long. Gates open at 6:00 P.M. First pitch is slated for 7:05 P.M.

Saturday, August 27 is the Mavericks’ SKYROCKET SATURDAY where fans can enjoy the best FIREWORKS show in the High Desert following the conclusion of the game. Additionally, after the conclusion of the game before fireworks, all kids 12 and under in attendance will be invited to participate in Kids Run the Bases, presented by Jack in the Box. As each child exits the field, they will receive a coupon for one free item at Jack in the Box. Gates open at 6:00 P.M. First pitch is set for 7:05 P.M.

Sunday, August 28 features 75th Anniversary and Sunrun Sunday. Celebrate 75 years of the California League and get two, upper bowl tickets for $7.50 at the Heritage Field box office. Also, a Sunrun booth will be in the concourse for great prizes and to learn how you can save 20% on your electric bill with solar energy. Gates for the game open at 4:00 P.M. First pitch is slated for 5:05 P.M. Also, after the conclusion of Sunday’s game, all kids 12 and under in attendance will be invited to participate in Kids Run the Bases, presented by Jack in the Box.

Wednesday, August 31 is the last TICKET AMNESTY NIGHT. This is the final opportunity for any Mavericks fans to trade in ANY UNUSED TICKETS from previous 2016 Mavericks games. Tickets may be traded in at the Heritage Field box office on the night of the game, but trading them in advance is recommended. The Heritage Field box office is open Monday – Friday 8:30 A.M. to 5:00 P.M. Any unused 2016 Mavericks game tickets (groups, individual, online purchases, season ticket, etc.) may be traded in for this game. It is also Winning WINsday where fans get a FREE ticket to Fan Appreciation Night on September 1 with a victory. Gates open at 6:00 P.M. First pitch is set for 7:05 P.M.

Thursday, September 1 is FAN APPRECIATION NIGHT and, after 26 years, closes out the FINAL Mavericks regular season game ever. Join the Mavericks while we celebrate YOU – the fans – and 26 years of professional baseball in the High Desert with nine innings of prizes. It is also the final Thirsty Thursday – $2 small domestic beers, $2 Pepsi can products and $4.50 large domestic beers. Gates open at 6:00 P.M. First pitch is set for 7:05 P.M.

Mavericks 2016 PLAYOFFS TICKETS are ON SALE NOW! The High Desert Mavericks first 2016 Playoffs games are on Saturday, September 10 with FIREWORKS and Sunday, September 11, where 50% of tickets sales on the date will be donated to charity in honor of the 15th Anniversary of 9/11. For more information, fans can visit HDMavs.com or call the front office at 760-246-6287.