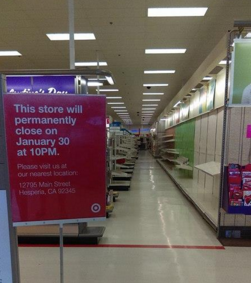 VICTORVILLE-(VVNG.com):  The closure of the Victorville Target came as a shock to many Victor Valley residents. The store, which is the oldest in the area

was opened in 1987, carrying many memories for long-time Victor Valley residents.

The store will be open on January 30, 2016, and will close at 10:00 p.m. to never open the doors as a Target again, officials told Victor Valley News. “I remember this being only Target in the desert and the outside of it was a very 70’s dark brown and orange tile. Also, the dollar theater was across the street. Many memories of the “old” desert, sad to see it change,” said Rina Kennedy, as she reminisced.

As of Saturday afternoon, the shelves are nearly bare, and those that are not are tagged with the city of the store that the merchandise will be moved to. Target Spokeswoman, Kristy Welker said that the employees were given the chance to transfer to other local stores including the Hesperia and Apple Valley locations after the decision was made to close the low performing store was made in the fall of 2015.

Some have expressed concern over yet another vacant building, after the Walmart that was located on Bear Valley Road near Balsam Avenue closed over 3 years ago. The large building still sits vacant today with the smaller stores experiencing a financial loss due to the loss of Walmart in the shopping center.

Kaiser was contacted, hoping that they would jump at the chance to expand their presence in the city, but at this time, there have been no commitments made for that occupancy.