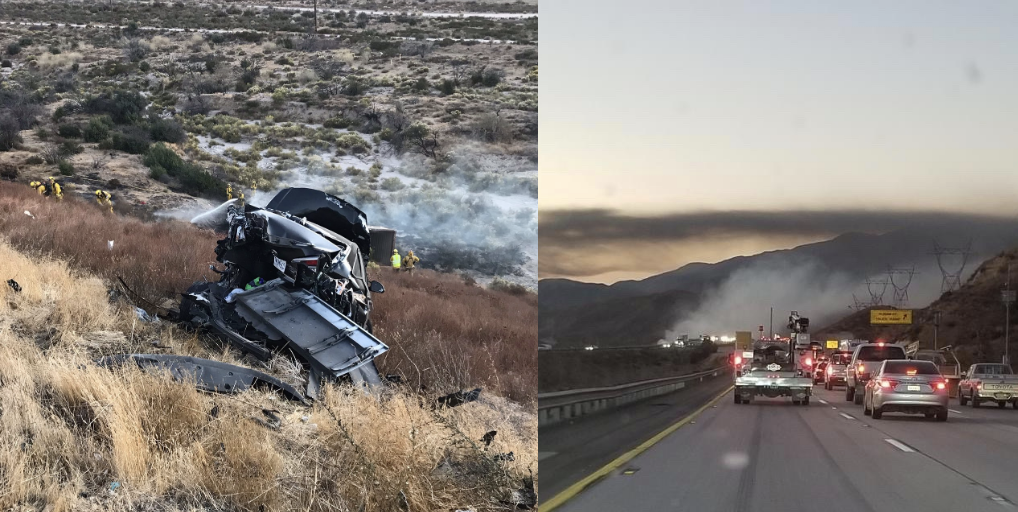 According to the California Highway Patrol incident logs, an 18-wheeler, tractor-trailer combination hit debris from another big rig causing the semi to crash down an embankment where it caught fire.

The driver was able to safely exit the cab of the truck and called 911 for help.

Firefighters arrived on scene and located the semi along with surrounding brush on fire. Crews jumped into action and were able to quickly get a line around the fire and kept it from spreading.

A SigAlert was issued at 6:02 am for the no. 4 and 5 lanes as they are expected to remain closed for several hours. CHP has started a traffic break on the northbound just south of Highway 138.

CalTrans District 8 tweeted photos from the incident and advised motorists to expect heavy delays on the NB-15. A semi and vehicle went over the side and damaged 300 ft of the guardrail.

People making their way down the hill on the southbound side are also reporting traffic is backed up to Ranchero Road as a result of lookie’loos.

Handcrews are en route to the fire and will assist with mop-up efforts that are expected to take several hours.

A heavy-duty tow has been requested for the semi over the side. The semi was reported to be hauling car parts and is approximately 200 feet down a ravine.

No serious injuries were reported and the official cause of the accident is under investigation by the California Highway Patrol.

This story will be updated as additional information becomes available.