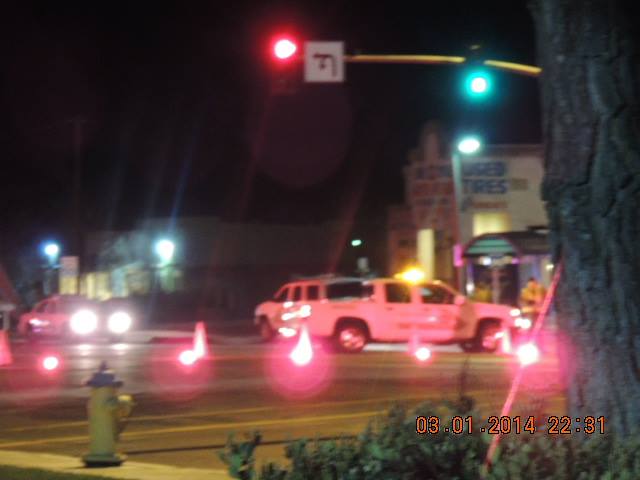 HESPERIA: Deputies from the Hesperia Station and rescue personnel from the San Bernardino County Fire Department responded to a vehicle vs pedestrian traffic collision on Main St. east of Maple Avenue on March 1, 2014 at about 9:49 p.m.

According to a news release, upon arrival deputies found that two vehicles and a pedestrian had been involved in the collision which occurred in the westbound lanes of Main St.

Investigators determined that one of the vehicles, a 2001 Ford traveling west on Main St. struck the unidentified female pedestrian as she attempted to walk across the street in front of traffic. The victim went down in the roadway as the driver of the Ford pulled to the shoulder.

A second vehicle, a 2014 Chevrolet also traveling west on Main was not able to see the victim in the roadway and she was struck a second time. The female victim was pronounced deceased at the scene. Her identity is pending identification and notification of family.

None of the vehicle occupants received any injuries.

Deputies from the Hesperia Station’s Major Accident Investigation Team (MAIT) are conducting the investigation and the name of the victim is pending positive identification and notification of family. The investigation is ongoing and Main St. is closed in both directions between Maple Ave. and Oakwood St. while MAIT investigators process the scene for evidence.

Anyone with information or anyone who may have witnessed the collision is asked to contact Deputy Scott LaFond from the Hesperia Station.