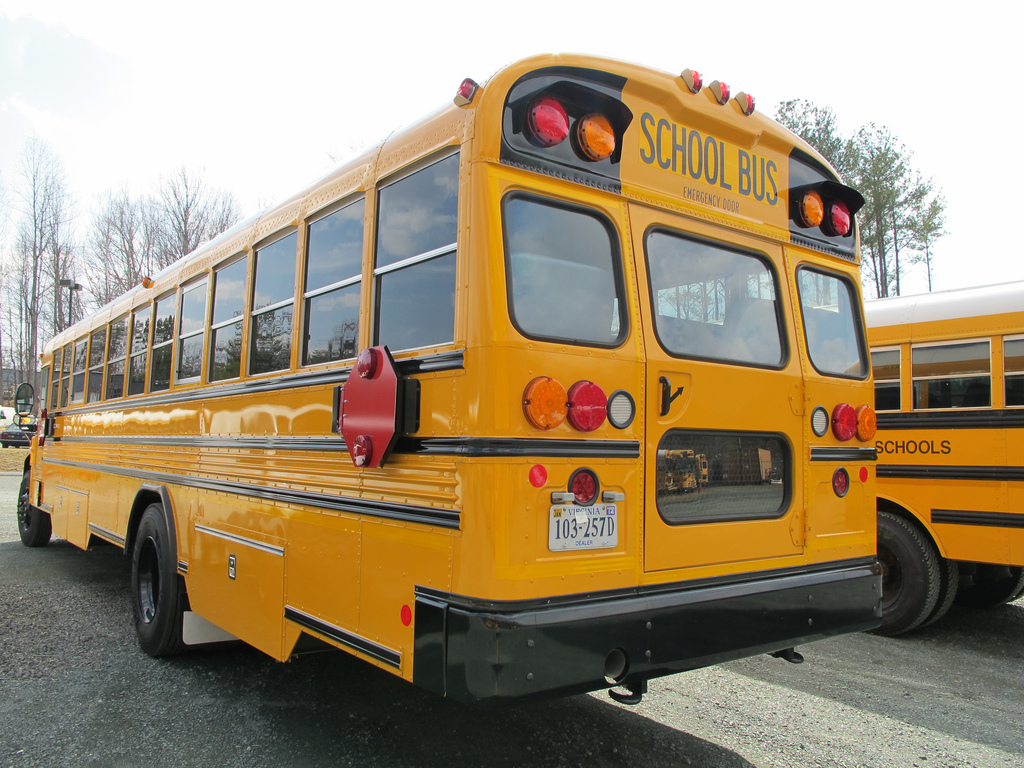 HESPERIA-(VVNG.com): The man who reportedly entered the Hesperia School District school bus on Thursday afternoon expressed in a Victor Valley News article comment, that he did take a step on to the bus, but only as support for his continuously bullied daughter.

The man, who now identified himself as 39-year-old Tom Tranter, said that on the afternoon of September 17th he went to wait at the bus stop after his daughter sent him a text message saying the other students on the bus were again throwing things at her. “This has been happening since the middle of last school year with the “cool kids” that sit in the back of the bus,” said Tranter.

Tranter alleges he went through all the proper steps for resolution of this problem, but even with multiple calls to the school police and principal there was no resolve. He said that he was at one point offered a switch of bus, making her walk over a mile additional to the bus stop. The school also told Tranter that the students must be positively identified in order for them to take any other action.

“When the bus driver asked her to point out the bullies and the (juveniles on the) bus started chanting “snitch. snitch”, I took one step onto the bus to give her the courage to identify them and to stop the chants,” said Tranter. He said that the driver asked him to step off of the bus, and he did once the juveniles allegedly taunting his daughter were identified.

He says he did follow the bus to the next stop, and says he was driving the same speed of the bus. During that time he says that despite numerous unconfirmed stories that later emerged, he followed traffic laws getting to the next stop at 7th Avenue and Palm Street. He says that he then followed the child that was throwing things at his daughter.

“Just like a mail man drives, hazards on, driveway to driveway I followed the “thrower”,hoping to gain an address to bring back local authorities. After finding the location of the “throwers” house, I proceeded home only to be pinned in by a few other parents, who refused to hear my side of the story and held me there against my wishes while they called the police,” he added. He said that the mother of the name caller approached him to confront him and his daughter saying she was lying because her son was on his “last chance” and asked for proof he was involved.

“Once the police arrived and got us out of the mob of mother hens, I was released without incident and referred to school police who once again, haven’t gotten back to us.

Officials from the Hesperia Unified School District said that they met with concerned parents and the school police on Friday. The District officials were not immediately available for comment at this time, information will be updated as it is received.

Hesperia Unified School District Assistant Superintendent, Dave Olney said, “The school administration has been working with the students on the accusations of bullying. If warranted, (the) school police will be involved.” Olney also said that the district takes allegations of bullying very seriously and they want the students to feel safe and supported. While the school, the District and the school police are investigating the issue, Olney says the First Student typically handles discipline issues on their busses. “Disciplinary actions typically take place in a progressive fashion with warnings and bus letters, followed with bus suspensions and/or removal from the bus for the remainder of the year. Severe incidents may result in immediate suspensions/removal,” explained Olney. In addition, he said, “First Student and the drivers also coordinate efforts with school site administrators and, if necessary, the HUSD police department.”

Olney explained the need for proactive programs within all school campuses, with the Hesperia Unified School District implementing: “Rachel’s Challenge”, “Teen Truth”, “Safe School Ambassadors”, and “Second Step”. “Our counselors and psychologists work with students in small groups, providing our students with opportunities to have a voice and discuss issues.” said Olney. He say that at this time, the incident is still under investigation and together, the district, the school police and First Student are trying to determine exactly what did happen that day in order to handle the incident accordingly.