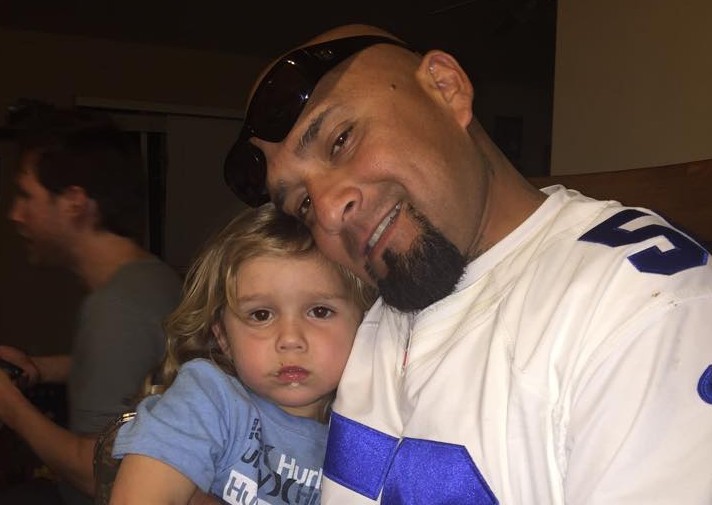 HESPERIA – (VVNG.com): As most families are preparing for the Christmas holiday, the family of a Hesperia man who was killed in a Friday night quad accident are feeling lost and realizing the world they once knew will never be the same.

Police searching the dirt lot at the corner of Tehachapi Street and Chester Avenue. (photo by Hugo Valdez)

“It’s not fair he was only 41 years young and has small babies. My two-year-old keeps asking for his daddy, I don’t know how I am supposed to go on,” expressed the deceased mans fiancée Jennifer Garcia.

According to authorities, Garcia was riding a Kawasaki RFX 400 quad traveling west bound on Tehachapi Street just before 5:00 p.m. For unknown reasons Garcia lost control of the quad in an empty dirt lot on the west side of Chester Avenue between Tehachapi Street and Clear Creek Street. Garcia was ejected from the quad and sustained life threatening injuries.

Jennifer also shared that while she was out shopping her children began to worry about their father not returning home. That’s when the 10-year-old step son decided to ride his scooter and go looking for him. Within minutes he found his father lying on the ground in a field directly behind the family’s home.

“He seen him and his heart stopped, he ran to him and started yelling for help. He said he was telling him to hold on. He also said, if he would have found him sooner he could have saved him. I told him he couldn’t have and that he was very brave and strong,” shared Jennifer.

A nearby neighbor heard the young boys screaming and rushed over to help. He attempted to give Garcia CPR while waiting for paramedics to arrive. Garcia was transported by ground ambulance to Desert Valley Medical Center where he was pronounced dead a short time later. Through the investigation it was determined the victim was not wearing a helmet at the time of the crash.

The family is asking for help during this difficult time. Unfortunately, Garcia did not have a life insurance plan in place and Jennifer is left to try and pay for everything. For those wishing to help with donations a link has been set up by the family: https://www.gofundme.com/hyw7fs