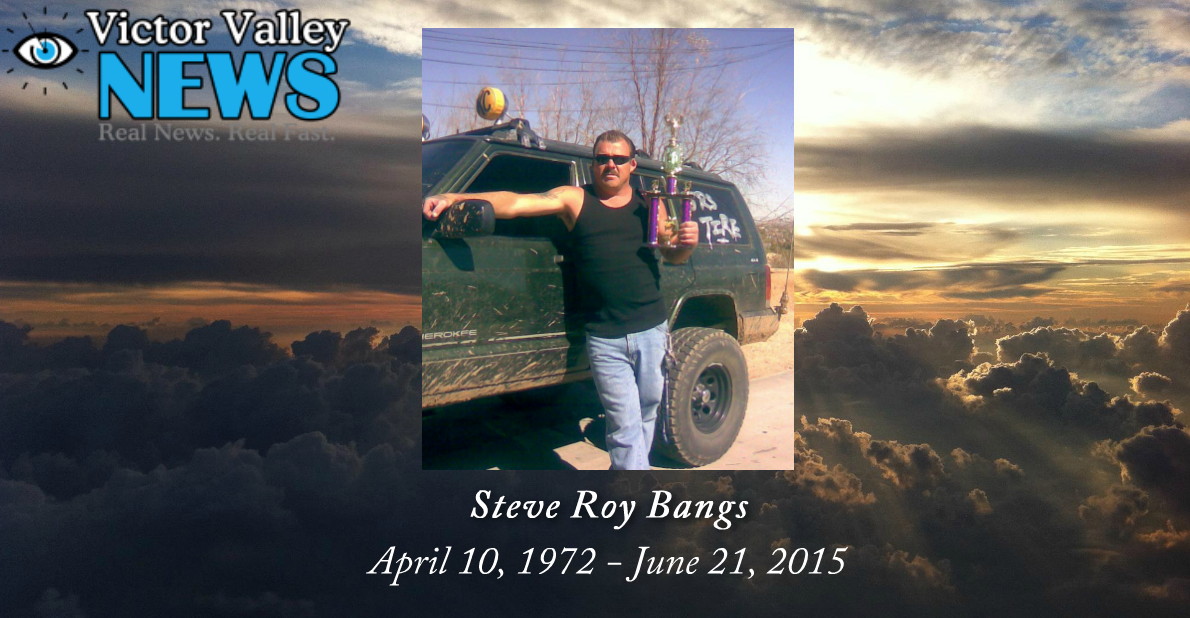 HESPERIA-(VVNG.com): On Father’s Day Sunday, hundreds of people turned out to Deep Creek as a way to celebrate the special holiday by bringing out various off-road vehicles. With temperatures in the triple digits, many were out enjoying the sun and having a good time. One of those residents was 43-year-old Steve Roy Bangs, a resident of Hesperia.

According to his sister Patricia (Pattie) Wheeler, this was something Bangs did regularly and nobody ever imagined it would end the way it did.

The fun was quickly disrupted when an alleged argument occurred and shots began to ring out.

According to scanner traffic, several suspects armed with hand guns began firing aimlessly at those in the immediate area, causing many to flee from the location.

When police arrived, they located a lifted pick-up truck with Bangs body inside. He was pronounced deceased at the scene after suffering a fatal gunshot wound.

Father’s Day will never again be the same for Bangs’ three boys; Nicholas Bangs, 16, Steven Bangs, 22, and Kyle Beadles, 25. Two of Bangs son’s were his biological sons and one was his stepson, that he also helped raise and loved dearly.

He also leaves behind his parents, both in their early 70’s with major health problems, two sisters and one brother that will miss him dearly.

Steve Roy Bangs, a local tow truck driver and mechanic, was born on April 10, 1972. He had a girlfriend named Melissa, that he has been in relationship with for about a year. Melissa is taking the loss of Bangs very hard, in addition to recently suffering a loss of her own father.

“He loved his family and he would do anything for anybody no matter what time day or night,” said Patricia (Pattie) Wheeler.

His youngest son, Nicholas Bangs has asked that his father is cremated so he can keep his father with him always, the family would like to respect his wishes.

Steven Bangs lives in Arkansas and would like to fly to California to be with the family and attend the memorial service.

The family is a hard-working family who work hard to make ends meet. The untimely death of Bangs has the family concerned about how these extra expenses will be covered.

There also have been several unauthorized Go Fund Me accounts stating they were made for the family, but when asked, Wheeler stated that they were not in any way approved by the family. Wheeler is ultimately the one responsible to lay her younger brother to rest due to their parents being plagued by Leukemia and severe Rheumatoid Arthritis.

The family is in need of help to pay for his son’s flight home, to pay for the cremation and for a proper memorial service.

If you would like to help the family with the expenses due to the untimely loss of a son, a brother, a father and a friend, there is an authorized go fund me account set up by Wheeler.

Bang’s was part of a Facebook group called Deep Creek Outlaws where many fellow members share their fond memories of him:

The first big rain storm we had this year we decided to go up 3n 14.. Almost rolled my truck off a cliff and had to leave it and walk home in the middle of the night. The next day I posted in a group asking for help in pulling out my truck.. He was the first to respond and the first to show up.. He led the whole thing and pulled out my truck and saved it! He was the only one who didn’t accept my 20 dollars I offered him for gas.. Such an awesome guy,  stated Bri Cunningham.

The group has planned a car show in honor of Bang’s that will be held on Friday, June 26th at Full Service Diagnostics located at 18285 Highway 18. The car show will run from 8am-5pm.

The San Bernardino County Sheriff’s Department determined that over 200 people were in the vicinity of the Sunday evening shooting, and are asking for anyone with information to come forward as they are still actively investigating.

Anyone with information is asked to call Detective Grant Ward or Sergeant Jason Radeleff at 909-387-3589. Callers wishing to remain anonymous are urged to call the WeTip Hotline at 800-78-CRIME or leave information on the WeTip website at www.wetip.com.