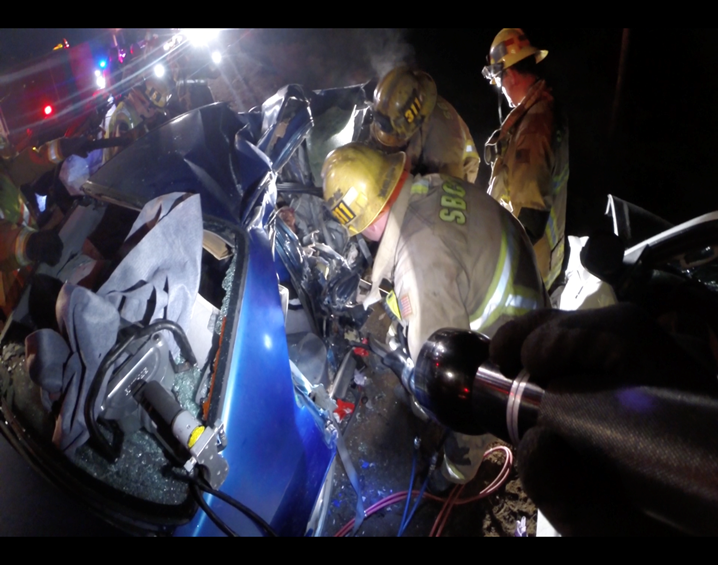 ORO GRANDE: Dispatch received a call at approximately 11:37 P.M., on Monday, reporting a traffic collision involving a pickup truck and a passenger vehicle on the 18300 block of National Trails Highway.

CHP, Sheriff’s and AMR responded to the scene and discovered two vehicles with major damage and multiple patients trapped, requiring extrication from the vehicles.

Per scanner traffic, the first patient described as being a pediatric patient, was transported by ground ambulance to Loma Linda Medical Center and reported to be in stable condition.

A second patient, listed as being in critical condition was extricated and transported by ground ambulance to St. Mary’s Medical Center with unknown injuries. A third adult patient was extricated from a vehicle and his condition was downgraded as having moderate injuries and he declined medical treatment.

A fourth patient was declared DOA (Dead on Arrival).

A hard road closure was requested for National Trails Highway blocking westbound and eastbound traffic. The roadway was shut down at Airbase Road.

First responders requested an airship to transport the most seriously injured victim to a trauma hospital. Unfortunately, due to weather the airship request was aborted.

According to a preliminary investigation it was determined that a blue 1993 Honda Civic was traveling northbound on National Trails Highway, just south of Wilderness Court. For unknown reasons the Honda collided head-on with a white Ford F-150 pickup truck.

The name of the deceased will be released following confirmation of identity and notification to the next-of-kin. The Victorville California Highway Patrol is investigating the incident.