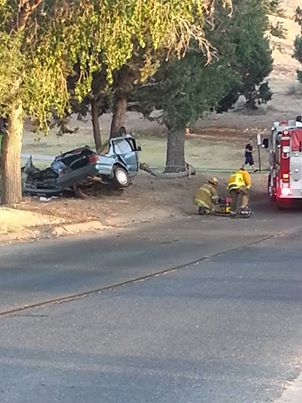 A press release described, “On June 17, 2013 at about 7:27pm, Deputies from the Hesperia Station along with rescue personnel from the San Bernardino County Fire Department responded to a report of a single vehicle traffic collision in the area of Peach Ave. and Orange St. in Hesperia. It was reported that a single vehicle had collided with a tree at that location. Deputies arrived on scene and discovered that the female driver of a 1991 Honda was trapped inside her vehicle that had collided with the large tree. Despite efforts from medical personnel, the female died from her injuries at the scene.”

According to a coroners release the victim is a 47 year old female and resident of Hesperia. The name will be released when identification is made. 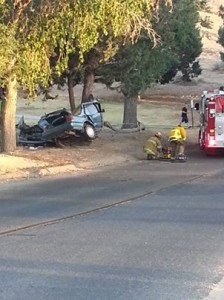 Photo by: Liz Hickcox via VVNG

The release also stated, “The Hesperia Station Major Accident Investigation Team (MAIT) responded to conduct the investigation. It was determined that the victim had been traveling north on Peach Ave. near Orange St. in her 1991 Honda at an undetermined speed when she failed to negotiate the curve in the roadway, losing control and hitting the tree. The impact caused the victim’s vehicle to separate into two pieces around the tree, trapping the victim inside.

Peach Ave. was closed in the area for about 4 hours while investigators processed the scene for evidence and removed the vehicle from the scene. At this time the exact cause of the collision is still under investigation by the Hesperia Station MAIT Investigators.

Any information regarding the collision, please contact Deputy Kevin McCurdy at the Hesperia Station.”

Drive Sober or Get Pulled Over