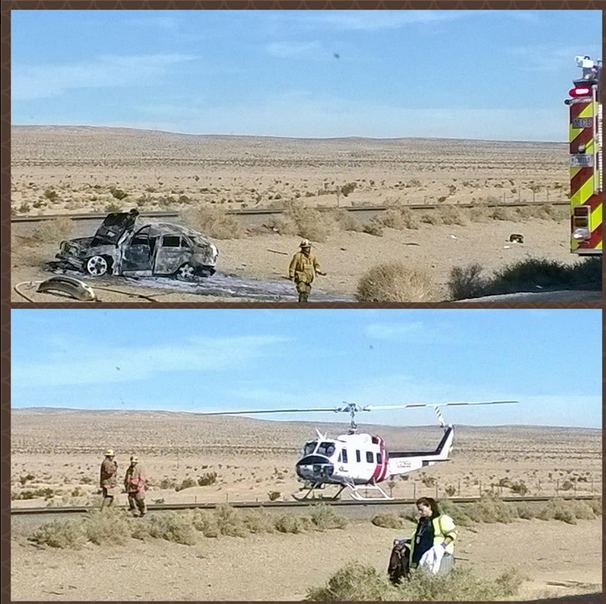 (VVNG.com): At 11:02 a.m. on Thursday, October 30th there were multiple reports of a white 2001 BMW X5 overturned into the center divider of the 15 freeway just north of the Barstow area. The vehicle according to reports was heading northbound just north of Alvord Mt. Road. For unknown reasons the adult male driver lost control of the vehicle and left the roadway causing the vehicle to overturn in the center divider ultimately landing on it’s wheels.

The vehicle, with two passengers, caught fire and became fully engulfed shortly after impact. A passing motorist was able to help drag the driver and front passenger out of the vehicle. The male driver sustained fatal injuries and was pronounced dead at the scene. The female passenger sustained major injuries and was subsequently airlifted to Loma Linda University Medical Center. The freeway temporarily closed on both northbound and southbound lanes due to a request for an airship. As of 12:40 p.m. all lanes were reopened to traffic.The exact circumstances of the accident is unknown at this time and is still under investigation. This collision is still under investigation by the Barstow CHP Area. Drugs and alcohol do not appear to be a factor in the collision.