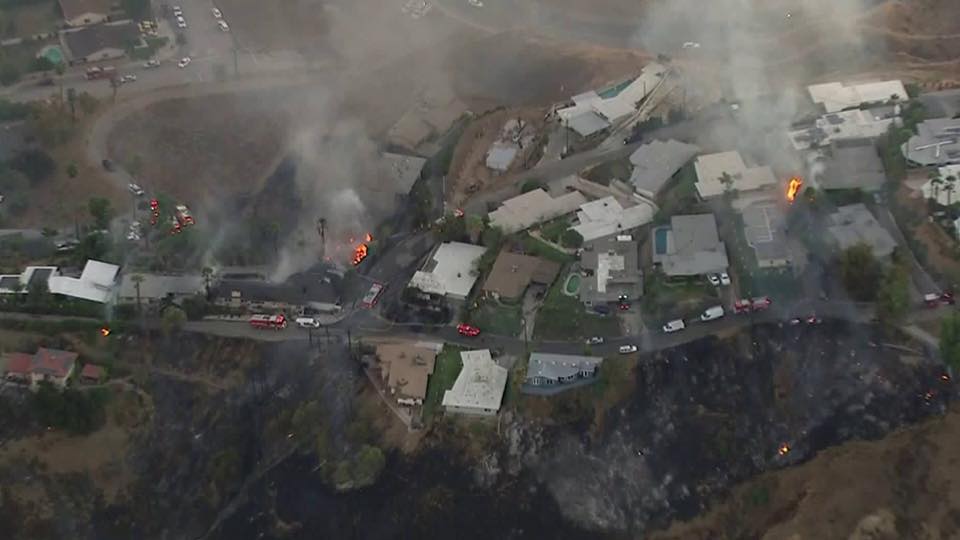 SAN BERNARDINO, Calif. On At 4:52pm San Bernardino County Fire crews were dispatched to a reported vegetation fire in the area of 39th Street & North Severence Way near Little Mountain, in San Bernardino.

ME227 arrived within 4 minutes of dispatch to find a 5-acre vegetation fire, that was slope and wind driven, with a rapid rate of spread.

Additional fire crews responded and engaged in structure defense to keep the fire away from the homes. While engaging in structure defense, multiple residents were rescued or assisted with evacuation to a safe area. Initial crews also encountered power lines that had fallen or were comprised, making access more difficult.

Crews continued to work on perimeter control & structure defense for multiple hours.  By 9PM the fires progression had been stopped at 17 acres. Of the 40 homes immediately threatened, 3 homes were heavily damaged and an additional 6 structures received minor to moderate damage. Two firefighters received minor to moderate injuries, were treated at a local hospital and since have been released. A family of 4 (2 adults and 2 children) were also transported to a local hospital with smoke inhalation and minor burns. They were injured while evacuating their home. Red Cross was requested to assist with displaced residents & to facilitate their needs.

Fire Investigators responded to determine cause and origin.  Fire crews remained on scene throughout the evening and will be in place today to work on hot spots and increase containment. A #SBCoFD Damage Assessment will be heading to the scene Tuesday to complete a damage assessment. No estimates were available at the time of the release. Tuesday morning will also bring a day shift with (5) #SBCoFD engines, hand crews & a team of fire investigators.

Being prepared for a wildfire or other fire disaster starts with making a plan. That’s why the San Bernardino County Office of Emergency Services created the ‘Ready SB’ app. Download the Ready SB app today and it will guide you step-by-step in creating your customized family disaster plan.  During a disaster, use Ready SB to receive emergency alerts, evacuation and shelter information, live up-to-date traffic reports, contact information of nearby resources, and everything you need to know to stay safe before, during, and after a disaster.