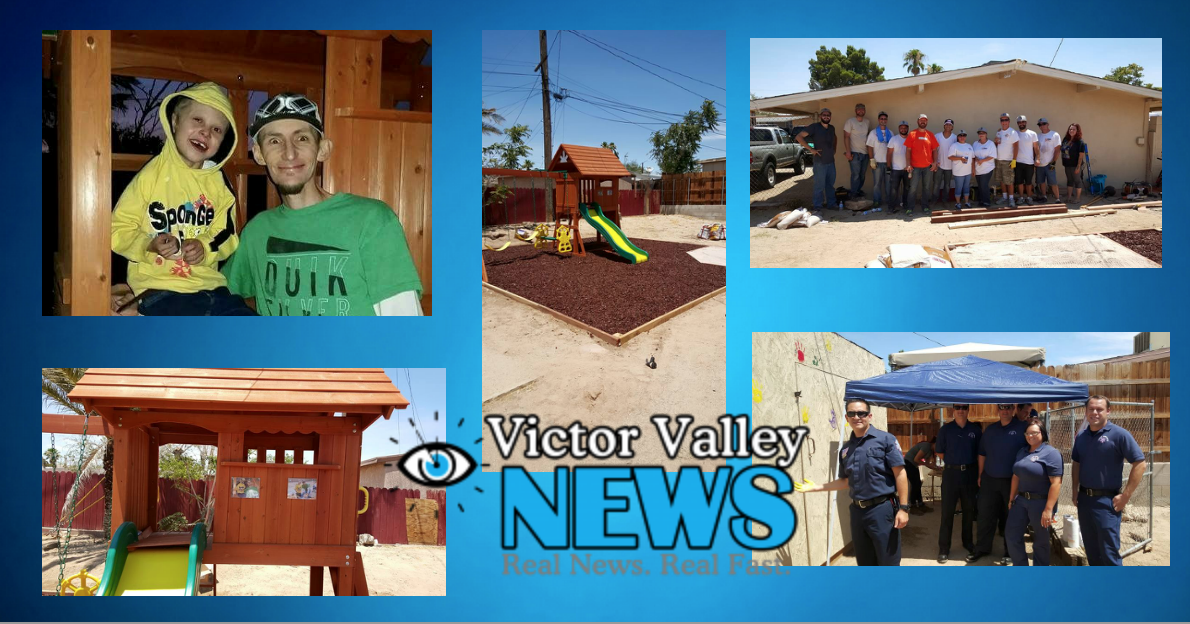 BARSTOW-(VVNG.com): Family tragedy lead to community triumph for Cathyleen Williams, the Barstow mother of an 8-year-old suffering from Hypoplastic Left Heart Syndrome. The condition is where the left side of the heart is underdeveloped, which causes congestive heart failure.

Caleb Lucas, 8, has already in his short life been through approximately 50 surgeries, 9 being open heart. Caleb has suffered from two heart attacks and a stroke, which left him developmentally delayed.

On June 30th, after a necessary move to a new home in November 2014, Home Depot came to the home of Cathyleen and her son to build a real-life park inspired playground in their own backyard. “

I can not thank the community enough for stepping up, for being part of team Caleb and helping to make this a reality,” said Cathyleen. She named several businesses and individuals that played a key role in the happy ending to a story that began as anything but that.

Back in the summer of 2014,  Cathyleen faced numerous setbacks, she felt almost as though there was no hope. Due to his condition, normal childhood colds can become life-threatening for Caleb. Cathyleen must tell her young son no when he wants to experience simple things like school or the park because the germs are just too scary to expose her son to.  Every time the two would drive past the park excited cries, “Park! park! park!” would come from the backseat as Caleb excitedly hoped that, that day he would be able to go play. Cathyleen, wanting her son to live a happy normal life, so many times had to reply back with, “No not today Caleb, maybe another day” in fear of the germs a park could expose him to.

In fall 2013, Caleb began school over Skype where he was able to interact with other students and remotely be part of a real class. Good news followed when Home Depot offered to help convert the garage into a classroom for Caleb.  Cathyleen’s excitement of the prospect of a classroom giving young Caleb a closer to normal school experience turned to shock when her two aunts, that were also on the deed of the home they were living in refused to sign the agreement.

“That is what made me start, Fight For Caleb’s Classroom”, said Cathyleen.

The small Barstow home that Caleb and Cathyleen lived in was cooled using a swamp cooler, which she did not realize that this would be a problem for her son that is on the waiting list for a donor heart until she read a story about another girl, Zena that was unable to get a heart because the family did not have central air conditioning.

This is when Williams decided she needed to insure that once her son is ready to get his heart, nothing would be stopping him. She again had to contact her aunts in order to upgrade the home with central air conditioning, one of the aunts would not approve for the upgrade to be made to the home. Cathyleen felt that no matter what she did to attempt to save her son’s life, there was always someone or something getting in the way. At that point, an attorney advised that a move would be the best option for Cathyleen and Caleb.

Cathyleen, who gave up a career as a teacher at a local Christian School to care for her medically fragile son, was motivated to make the move happen. She started selling baked goods and right away made $2000, she was ecstatic realizing at that rate it would be only months until she could afford the move. Yet again, something happened to halt her progress, someone reported her for selling baked goods, something she did not even realize was not acceptable to do.

“I did not even know that was not ok to do, I was just trying to save my son,” she cried.

After all of the setbacks, finally the Barstow mother is seeing that the efforts and the will to continue the fight no matter what, is paying off.  “I am glad my aunts acted in such an ugly way, it gave Caleb and I a whole new family.  The way that so many in the community stepped up to be part of Team Caleb is something I can not even thank them enough for,” said Cathyleen.

The playground installed by Home Depot is equipped with swings, a seesaw, a slide with bark beneath just like a real park. Cathyleen also has a nearby wall with colorful handprints of everyone involved with the efforts in making this dream a reality.  “Now Caleb has his heart home and his playground. We are now ready for his new heart when it is time” said Cathyleen, crying tears of happiness.

To follow the journey of Caleb Lucas be sure to LIKE the FB page: Caleb Lucas Incredible Heart Journey