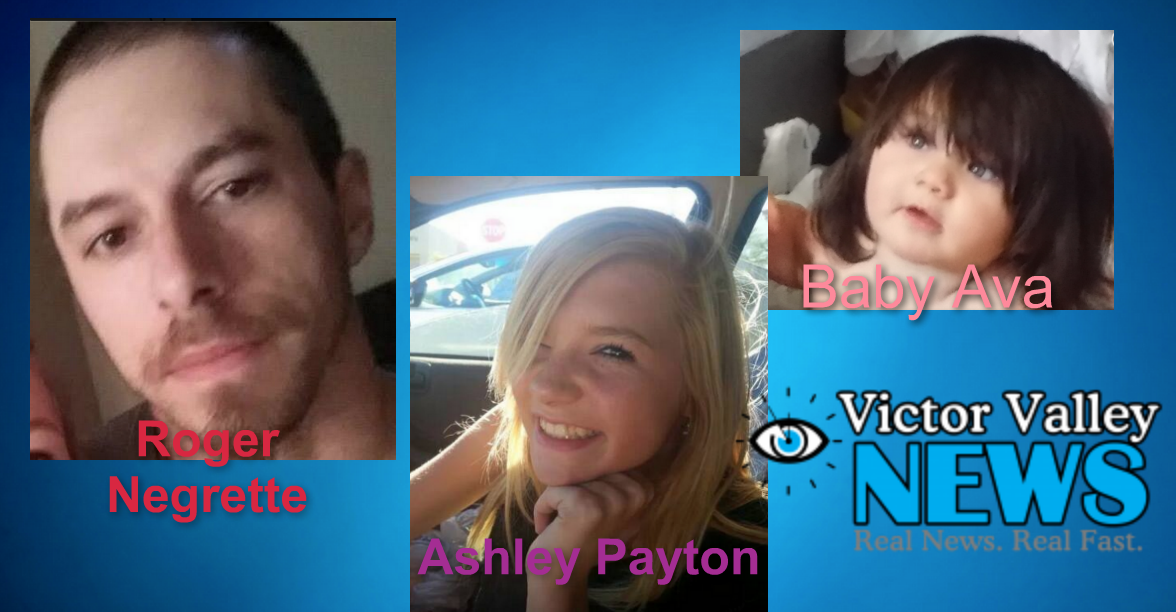 VICTORVILLE-(VVNG.com): After the heart wrenching death of 11-month-old Ava Costello (daughter of Desiree Naranjo and Daniel Costello) and the subsequent arrest of 35-year-old Roger Negrette, information has surfaced about the family dynamics in their home located in the 16200 block of Midway Street.

In February 2014, Taylor’s 15-year-old daughter Ashley Payton (who was a student at Riverside Prep) was believed to have attempted to take her own life. She was hospitalized following that incident but eventually died, despite the fact that her condition seemed to have been improving.

For months, Victor Valley residents reached out to Payton’s family, both emotionally and financially after it was believed that Taylor’s daughter committed suicide in February of 2014. Not much was questioned as all of the writing was on the wall…or so it seemed.

The extended family and friends of Payton paint a questionable picture of the circumstances surrounding the 15 year old’s death. Although the young girl did suffer some extent of bullying, it is believed to have not been nearly as severe as some were led to believe per Taylor and Negrette’s account. The last several tweets on Payton’s Twitter account portrayed a girl in despair. However, sources close to the family state that Negrette, who referred to himself as Payton’s father, had full control of all of the daughter’s social media accounts. Payton is described as a very strong person and one who always stood up for herself. To those surrounding Payton, they cannot fathom that she would have ever allowed herself to be a victim.

Following the death of Payton, her mother was observed reaching out for assistance on social media. She used her deceased daughter’s name and tragic death to ask the public for money, food and other things on various Facebook groups. In some of these online communities, Taylor mentioned physical, emotional and financial abuse at the hands of boyfriend Negrette. Taylor was encouraged by multiple people to leave this abusive relationship. Her demeanor became increasingly weak and at some points Taylor sounded near suicidal.

Friends and family of Payton’s (and concerned community members who have provided assistance to Taylor) contacted Victor Valley News to clarify this story. In response, Victor Valley News spoke with Taylor on Monday, June 15th trying to obtain further information. Taylor seemed concerned about the pending lawsuit for the wrongful death (claims of relentless bullying) of her daughter. Payton’s mother also stated that what happened with Negrette had nothing to do with the death of her daughter. During the phone call with Victor Valley News, Taylor also shared that her utilities were all in danger of being disconnected and that she had no money. When asked about her children, Taylor said that they were all removed from the home by children’s services. When questioned about this, she explained that Negrette failed a lie detector test (and that he had admitted to some things) and that there was a risk of her bailing him out. She said, “They were afraid that he would be around the children if bailed out.”

“I was there when they took the kids away because I was on a ride along with VVPD. It was a big sad mess, but the children are in a safe place now. That mother doesn’t deserve those kids. All 7 were taken.” shared Christopher Reulbach.

On Negrette’s Facebook page, he shared many posts in through which he gained sympathy for himself. His postings misled many to believe he was Payton’s biological father. Post after post, it became increasingly uncomfortable for some of his Facebook friends who felt that at certain points the postings seemed beyond a father grieving for the loss of his child. An anonymous family member reached out to Victor Valley News and revealed that Negrette never hid his inappropriate touching of the girls. For example, sometimes he would do things like reaching into the girls’ bras to get their phone. The concerned family member stated: “If this is being done outside of closed doors, what is happening behind closed doors?”

After Negrette’s friend’s 11-month-old child Ava was reported not breathing while in his care on Saturday, June 13th (and his subsequent arrest on June 14th), friends and family felt that they must speak up. Some of these individuals have held back for years and have finally stepped forward to talk. Payton’s sister, Tiffany Robertson, said that she is speaking out to protect the children involved. Robertson states that she has contacted authorities in the past, but because of Taylor and Negrette’s ability to easily manipulate, the children remained in their home. Payton’s death went uninvestigated and ruled as a suicide without a proper and complete investigation.

Robertson, who is now 24-years-old and married with two children, reveals that there was extensive abuse in the household. Allegedly, certain children were treated more poorly than others, some suffered sexual abuse and most were conditioned to believe that the abuse was normal.

As mentioned previously, the children in the home were not all Taylor’s and/or Negrette’s biological children together. One of the children (now a teenager) was adopted by Taylor and her ex-husband when she was a baby. Some in the family speculated that Ava was the child of the teenager and Negrette, but that was proven to be false.

Robertson told a Victor Valley News reporter that there were times when Taylor would withhold food from her children for as many as three days, at some points even withholding water. If the children got water on their own, they would be called “thieves”. Robertson alleges that Taylor would trap a child in the room by putting a piece of cardboard or other object in the door to know if the child got out. The thirsty child would climb out of a window of their prior home in Apple Valley to drink water from the outside hose.

According to Robertson, there were a few days that Taylor was a wonderful mom, but those days became fewer and fewer. Negrette allegedly kept Taylor “drugged up” on Ambien. To obtain Ambien, Taylor would send her children to a doctor and asked to lie in order to get the medication prescribed to them. When a child would refuse, he or she was treated poorly until the child complied with Taylor’s.

Payton, as well as some of the other children, were said to have suffered physical, mental abuse, and sexual abuse at the hands of Negrette. Some feel as though Payton was ready to tell about her ongoing trauma and that her life was taken because of that. Family members share that Payton’s condition was steadily improving in the hospital after her attempted suicide. However, after Negrette and Taylor left the room after being alone with Payton, her condition suddenly turned for the worse.

Robertson feels that the circumstances surrounding Payton’s death are suspicious.

“During her hanging, she was texting. How’s that possible? She also had self-defense marks on her hands. When Ashley [Payton] passed away it made a big deal that Roger [Negrette] had all her clothes and then threw them away. No one was allowed to touch anything. Also, there was a letter that got burned (I don’t know how true it is). We called hospitals to do a rape kit. No one could unless Tina [Taylor] said it was okay. She wouldn’t allow it.” said Robertson of her family’s battle for truth following Payton’s death.

According to family, the $12,000 in funeral expenses were paid for by Payton’s biological father, not Taylor or Negrette. The couple has since shared their story of constant threats of evictions, bills going unpaid with disconnection notices as well as other hardships. Their reasoning was that it was all due to hardships caused by the death of Payton or Taylor’s illness. Many have said Negrette claimed to leave his job to care for the children due to Taylor’s illness, but on Monday in a conversation with a Victor Valley News reporter, Taylor stated that she and Negrette live their own separate lives and she was responsible for the care of her children. She said Negrette was living in the garage at the time of the alleged abuse to 11-month-old Ava.

Numerous people came forward to Victor Valley News stating that they believed that they had been scammed by the family while reaching out to help them. Community members mention hundreds of dollars given to the family or spent on the family. One woman said, “[I spent] $400 to dress [the kids] and get school supplies, backpacks and in [giving] cash. They have lots of kids, 7 in all. They are safe now. I met them at Target in Apple Valley and Tina [Taylor] was drugged. All of the kids needed under clothes and had nothing for the first day of school. What we did was for the kids. If you saw how dirty they were and how their clothes were…You would have done something too.”

The children at this time are in protective custody. Payton and Robertson’s biological father (who is also the father to three of Taylor’s children who are now in protective custody) will be working to get them into his care. The other three children will remain in protective custody for the time being; including the two that are Negrette’s and one that is the couple’s together.
One family member said, “She [Taylor] would protect him [Negrette] over anything and she always chose the pills over her children”.

Negrette was arraigned on Tuesday, June 16th at the Victorville Superior court, where he put in a not guilty plea for assault on a child causing death and homicide. He is currently being held in lieu of $1,000,000 bail. His next court appearance will be on June 24, 2015 for his pre-preliminary hearing.