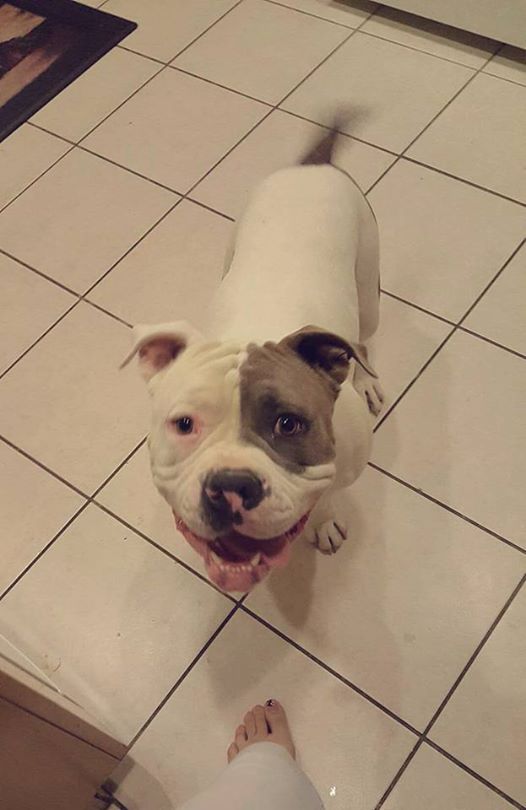 VICTORVILLE, Calif – When a family pet runs away it leaves a scar that won’t heal on those left behind. Loved ones will desperately post flyers, constantly check the local shelters, post photos on social media, and often times even offer a reward in hopes of being reunited.

On Father’s Day, June 19th, Ashleigh Vansickle and her family had the misfortune of experiencing what that loss felt like. Their beloved Alapaha Bulldog “Blue” went missing from their yard.

They did everything to try to locate Blue and even offered a $1500 cash reward. The family eventually learned that Blue had followed a couple walking to the Food 4 Less on Bear Valley Road.

After asking around at Food 4 Less the couple discovered that one of the security guards had tied the dog up in hopes that someone would come by looking for him.

They were eventually able to view the surveillance footage from that day and were shocked to learn that Blue was actually stolen.

The video showed a man walking by several times, and then arguing with a woman, as the woman walked away he proceeded to untie the dog and walk away with him.

After being missing for over a month, on July 26th Ashleigh and her family were reunited with Blue.

Ashleigh told Victor Valley News she received a call from a male stating he had found their dog. The male told Ashleigh, he saw blue being pushed away from people who were very scared of him on the street.

The good Samaritan picked up the dog and took him to safety. He recognized the dog from a missing flyer he had recently seen on Facebook. He immediately called the number on the flyer and gave Ashleigh the great news. The Vansickle’s were reunited with Blue and the good Samaritan even refused the cash reward.

“I am sure that someone was taking good care of him, he is very healthy and in my opinion I believe someone was keeping him then he got away,” says Vansickle. “I just cannot believe he’s home.”