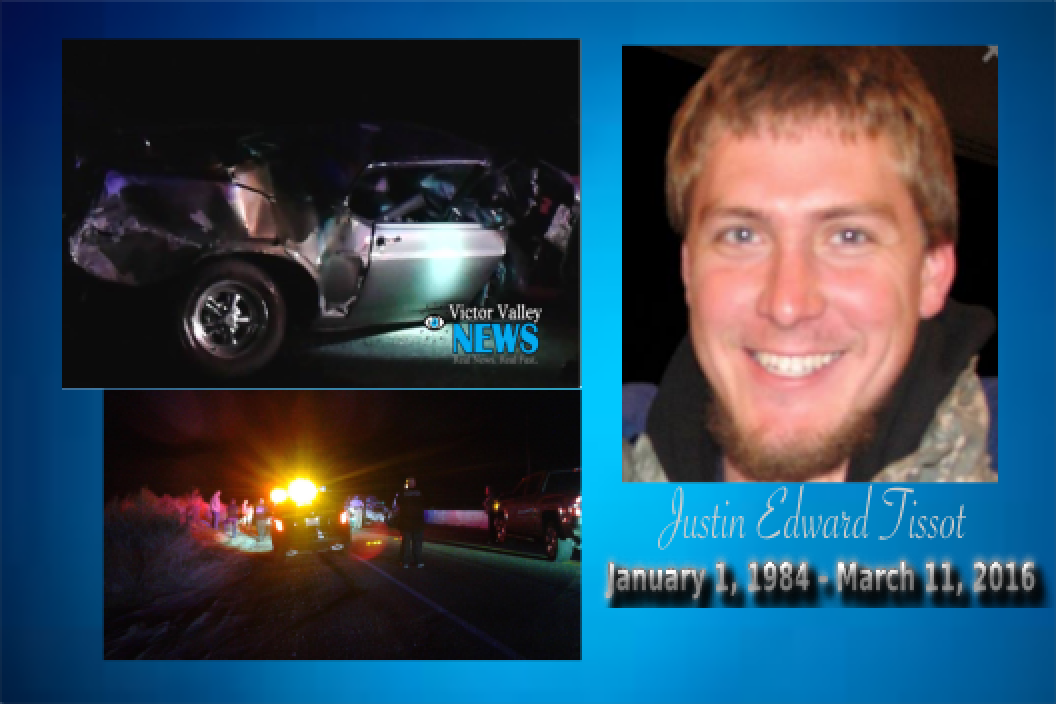 PHELAN-(VVNG.com):  Sounding heartbroken, and expressing sorrow for the family that lost a loved-one the first person other than those involved in the fatal SR-138 traffic collision last Friday spoke to Victor Valley News. His first name is James, and he said that he wanted to tell the family of 32-year-old Justin Edward Tissot, that Justin did not suffer and was not alone.

When James softly spoke to Justin while holding his hand, he asked him for his name, he (Justin) answered and immediately asked James what happened. James told him he was involved in an accident, and then he  immediately expressed concern about his 1969 Ford Mustang and before his last breath, James said he called for his mom.

A woman, also explained what her and her husband witnessed and said how helpless she felt being unable to get Justin out of his vehicle. She also wanted to be connected with his family. She asked to remain anonymous but said, “My uncle passed away that very same way on this very same highway at the young age of 20.  I was the first one to open the door in the morning before school to a cop that told me that dreadful news. I felt the helplessness and frustration not being able to help this man, I know the aftermath that this family is feeling now.”

The traffic collision on Friday, March 11, 2016 involved multiple vehicles. The investigation revealed that the woman driving the Saturn Aura was driving westbound crossed over double yellow lines in order to pass a semi-truck also driving westbound ahead of her. Once she crossed over, she collided head-on with Justin who was driving eastbound on his way home from work. The collision caused his vehicle to lose all illumination on the dark roadway causing a Ford F-150 to strike his already disabled vehicle.

Two of the occupant of the Ford F-150 suffered from minor to moderate injuries and were transported to the hospital for treatment of injuries. An extrication was necessary to free Justin from his vehicle, which was complete at around 1:15 a.m. at which time it was determined that he had succumbed to his injuries.

Adam Tissot told Victor Valley News that Justin had a talent for working on cars. He said, “The Mustang he was in, he bought at 14 years old. He restored and fixed it up with our dad in the backyard. That car was his baby. That’s why right after the accident he asked about it.”

The family is welcoming those who would like to celebrate Justin’s life with them on Friday, March 25th at 11:00 a.m. at the Planes of Fame Air Museum located at The Chino Airport 7000 Merrill Avenue #17 in Chino.

In lieu of flowers the family of Justin is asking that memorial contributions be made to Upland Animal Services.