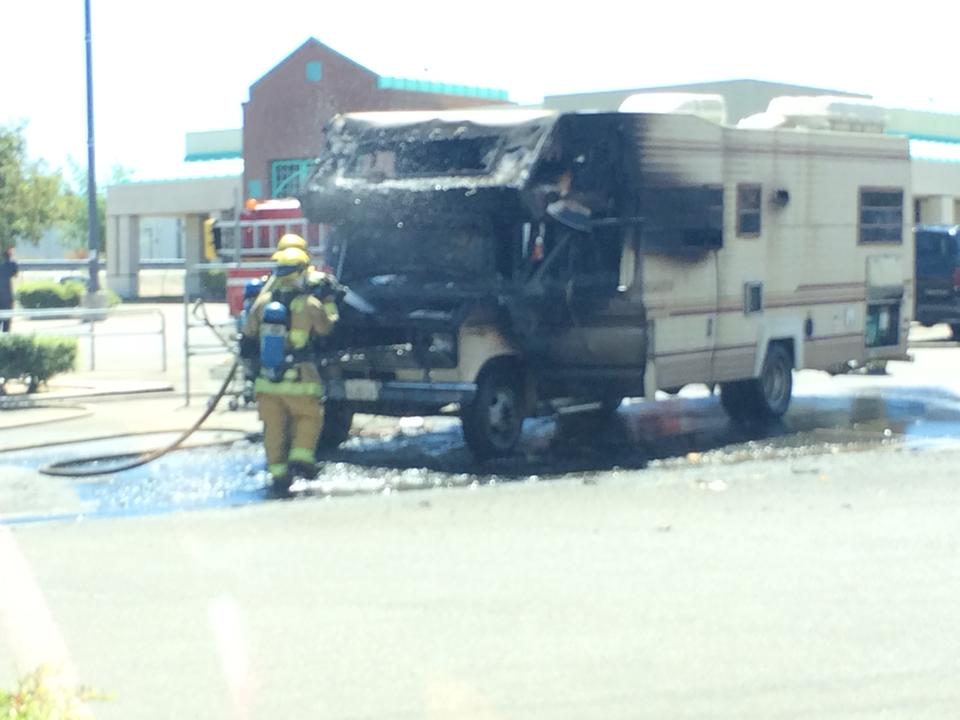 VICTORVILLE:(VVNG.com)- No injuries were reported after a motor home caught fire in a parking lot in Victorville on Thursday afternoon.

Dispatch received numerous calls reporting the fire and when firefighter’s arrived the motor home was fully engulfed. No other vehicles were damaged and it took firefighter’s a little over 10 minutes to put out the fire.

“People were knocking on the doors and windows before it burst into flames to check if anyone was in there and no one answered“, commented Victor Valley News member Kayla Travis Verral.

Just prior to the fire the couple parked the motorhome in a shopping center parking lot along the 12600 block of Amargosa Road. Witnesses reported seeing flames coming from the engine compartment. By the time the couple ran outside the motorhome was well engulfed. An electrical malfunction is suspected to be the cause of the fire.

“He worked two traveling jobs, so they lived in the motor home. Everything they owned was in there. His sons toys, clothes, Etc. If anyone would be willing to donate anything it’ll be greatly appreciated. Luckily, most of the boys pictures and two bibles were recovered,” stated Samantha Hedger.

The hard-working couple has two young children and had saved enough money in the past year to purchase not only a vehicle, but essentially their home. What was supposed to have been a quick stop into the bank turned into a nightmare. The young husband is now worried he will be fired from his two jobs due to not having adequate transportation. A gofundme account has been set up to help the couple purchase a replacement motor home. Anyone wishing to help can do so by donating here: https://www.gofundme.com/e2hlac