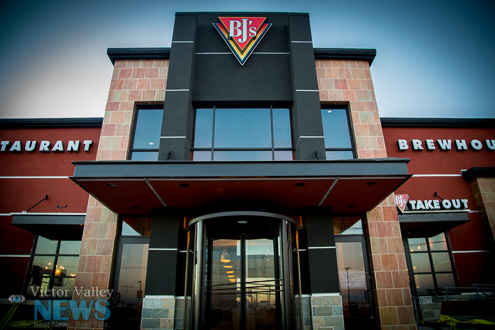 VICTORVILLE-(VVNG.com): Victor Valley residents have been patiently waiting since the summer 2015 announcement of two major upcoming business openings in 2016. The first opening is set to open in “early” 2016 and the second sometime in the Spring of 2016.

The excitement is mounting as residents see the over 7500 square foot BJ’s Restaurant and Brewhouse building near completion. The restaurant sits on the southeast portion of the Walmart and Lowe’s shopping center near Amargosa and Dunia Roads.

The Victorville City Manager, Doug Robertson said,”BJ’s hasn’t announced an opening date, but I believe they are shooting for February 1st.” Victor Valley News reached out to the BJ’s Restaurant and Brewhouse Corporate office, but no one was available for comment.  The restaurant is currently hiring for all positions, job listings were just added on Tuesday, December 29th on their corporate website.

The now famous restaurant that was founded in 1978 and gained popularity after it’s name changed from Chicago Pizza to BJ’s Restaurant and Brewhouse. Now with over 160 restaurant locations under the BJ’s Restaurant and Brewhouse name, many have not only become familiar with their famous menu items, but eagerly await them being obtainable close to home. Their menu items not only include delicious food, but also includes several award-winning handcrafted beers.

The second opening is set for Spring 2016 for the also very popular Krispy Kreme Doughnuts. Krispy

Kreme Doughnuts Spokeswoman, Sarah Roof said that the store is plans to open Spring of 2016, but at this time there is no more specific timeline for the opening. The over 3,000 square foot building will be built in the area between In-N-Out and Panda Express in the 15200 block of Civic Drive at the Roy Rogers Exit.

The plans are for the location to be open 24 hours a day, seven days a week. They will be employing about 8-10 employees per shift. This new location will not only be bringing fresh-baked doughnuts to the Victor Valley, but also much-needed employment to the area.

“Krispy Kreme Doughnuts has been around since their 1937 with their opening in Winston-Salem, North Carolina. Those in the Inland Empire were not exposed to the fresh-baked doughnuts until the opening of the Ontario location in 1999.

The closest locations to date are the Ontario, Palmdale and City of Industry locations. “We are excited to be bringing another Krispy Kreme location to California. Our doughnuts and coffee are classic products that we’re thrilled to be sharing with the Victorville community.”

Those seeking employment opportunities can go to https://www.krispykreme.com/careers/info for information on how to apply.