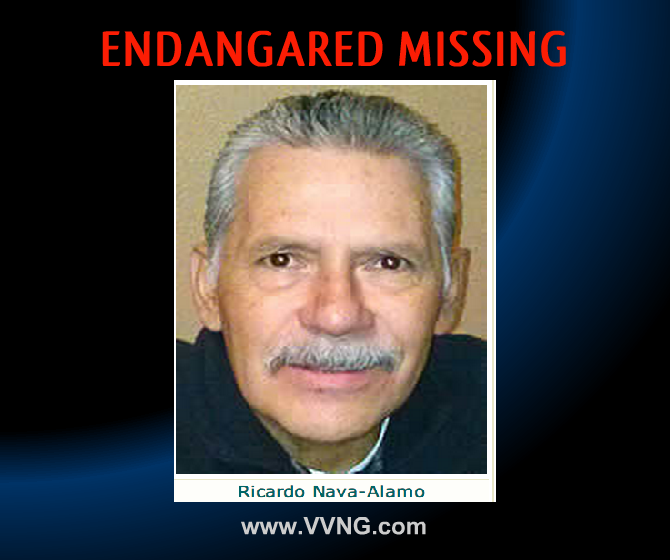 UPDATE: On January 26, 2014, about 9:30 PM, Mr. Alamo’s car was found abandoned in a rural desert area near Blythe, California. Moreno Valley Station Investigators responded to the Blythe area and assisted with the investigation.

Extensive searches of the area were conducted on foot, by air, with off-road vehicles along with the use of a bloodhound in hopes of finding Mr. Alamo for the next several days.

The Coroner’s Office took charge of the decedent and continued the investigation. On February 03, 2014, the decedent was positively identified as Mr. Ricardo Nava-Alamo of Moreno Valley. The family has been notified.

Family members are urging the public to help keep an eye out for a reported missing man who suffers from Alzheimer’s.

On January 6, 2014, officers from the Moreno Valley Police Department responded to the 24000 block of Cottonwood Avenue, Moreno Valley, regarding a report of a missing elderly adult.

Ricardo Nava-Alamo, a sixty-two year old Hispanic male, drove away from the residence in a purple, four-door, 1997 Honda Accord, with California License Plate number 3TUE345.

An extensive search was conducted by officers from the Moreno Valley Police Department and the Riverside County Sheriff’s Department aviation unit. Mr. Nava-Alamo was not located.

Mr. Nava-Alamo is in the advanced stages of Alzheimer’s and is considered at risk.

He is described as having grey hair, brown eyes, and a grey mustache. He is five feet-ten inches and weighs approximately 180 pounds. Mr. Nava-Alamo was last seen wearing a blue sweater over a V-neck, purple with black stripes sweater, blue jeans and white shoes.