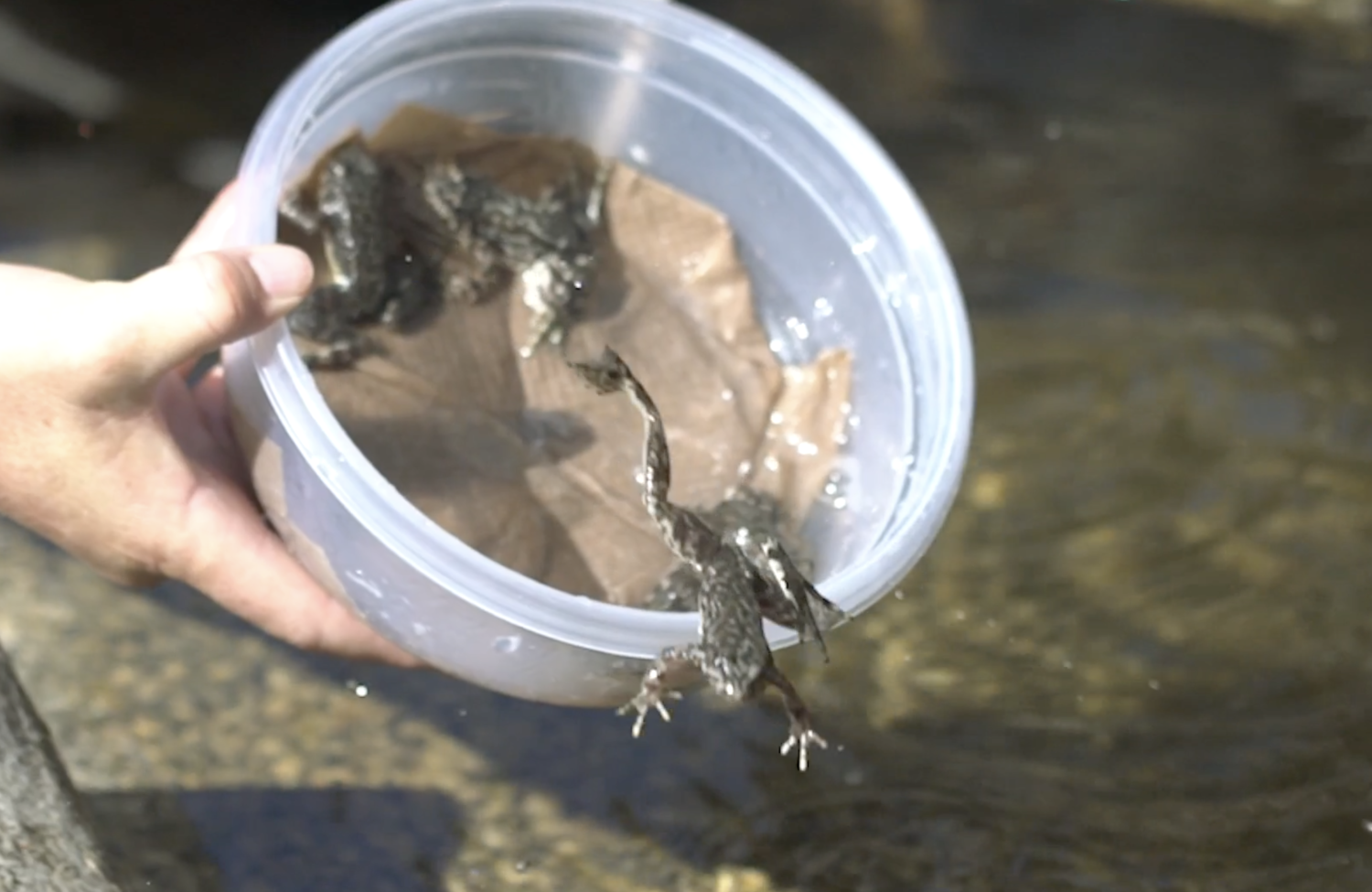 Carlsbad, CA – A team of scientists from the San Diego Zoo Wildlife Alliance, University of California, Los Angeles, U.S. Forest Service, California Department of Fish and Wildlife, and the U.S. Fish and Wildlife Service, reintroduced a group of 253 endangered Mountain yellow-legged frogs to a remote site on the San Bernardino National Forest on July 8.

This release is the second to occur at this location after the California Department of Fish and Wildlife completed an extensive habitat improvement project to benefit the frogs. An additional release is planned at this site later this month, bringing the total number of juvenile frogs to be released this year close to 400.

The frogs were bred by the San Diego Zoo Wildlife Alliance and are one year old. It is hoped that after completing successful overwintering in their mountain habitat, these frogs, which are a mix of males and females, will survive for the next few years to reproduce and establish a self-sustaining population in this portion of its range.

For more than 20 years, the U.S. Fish and Wildlife Service, California Department of Fish and Wildlife, U.S Forest Service, U.S. Geological Survey, San Diego Zoo Wildlife Alliance and other partners have worked together on recovery actions for the Southern California population of mountain yellow-legged frogs.

“It will take many partners working together to help us fully restore mountain yellow-legged frogs throughout their Southern California range,” said Scott Sobiech, Field Supervisor for the U.S. Fish and Wildlife Service’s Carlsbad Office. “Although the frogs still face many threats, this release is a tremendous example of the progress we are making towards recovery for the frog.”

“Climate change and chytrid fungus are creating challenges to mountain yellow-legged frog survival that the species has never faced before.” Said Debra Shier Ph.D., the Brown endowed Associate Director of Recovery Ecology and Southwest hub co-leader, San Diego Zoo Wildlife Alliance. “Through our collaborative efforts to create and grow ex-situ insurance populations, to use science to understand and mitigate threats and to develop effective reintroduction strategies, we hope to successfully reestablish the mountain yellow-legged frog in its native habitat and allow the species to play its important role in the ecosystem into the future.”

Several factors, including non-native predators, recreation impacts, and disease contributed to the disappearance of the species from most of its habitat by the time it was listed by the Service as an endangered species under the Endangered Species Act in 2002.

Over the years, recovery efforts have included management of lands on Angeles and San Bernardino National Forests to minimize human impacts to habitat; and conservation and research programs by the San Diego Zoo Alliance, U.S. Geological Survey, Los Angeles Zoo, Omaha’s Henry Doorly Zoo and Aquarium, Santa Ana Zoo, and UCLA to inform future conservation and management of the species.

“As land managers, our main role is to protect the frogs and their habitat so populations can recover,” said Kim Boss, district wildlife biologist for the San Jacinto Ranger District. “One example is closing populated streams to public entry when frogs are active. We thank the public’s continued adherence to the closure so these unique frogs have a fighting change.”

Although much of California is experiencing drought and heightened risk of wildfire, the conditions at the release site in the San Jacinto Mountains remain favorable to support the frogs.

“The Department has spent a lot of time evaluating, permitting and rehabbing release waters and we’re optimistic about the location.” said Russell Black, Senior Environmental Scientist Supervisor for the California Department of Fish and Wildlife. “It has a large amount of drought resistant habitat that should provide a stable location for these frogs for many years.”