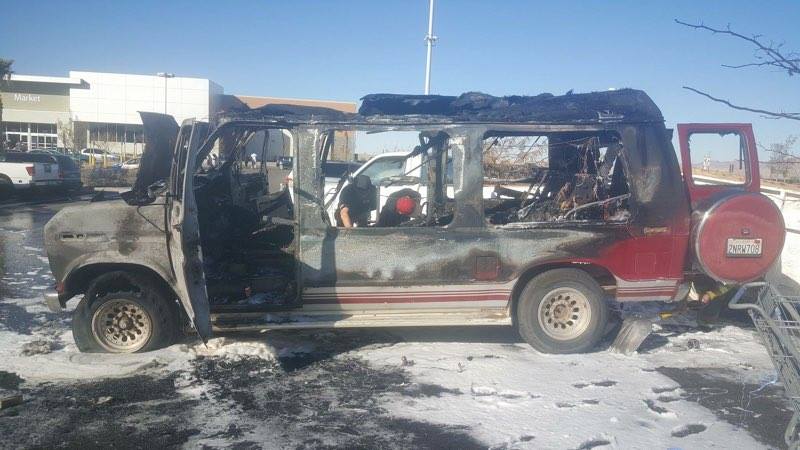 VICTORVILLE-(VVNG.com):  At around 2:15 p.m. on Wednesday, an Adelanto man walked into the Walmart on Palmdale Road and Highway 395 to get a quick bite to eat at the Subway restaurant. When 70-year-old Dan Gaddis walked out of the store he noticed a lot of smoke. He walked over toward where he parked his van and realized that the fire was coming from his van.

Gaddis began to run toward his van. When he got to the van, he noticed several people surrounding the van taking photos or capturing the fire on cell phone video. While running toward his well-involved vehicle, he asked if anyone reported the fire. He heard someone say yes, but around 10-15 minutes later when there was still no firefighter response, Gaddis decided to make a 911 call himself. Upon calling, Gaddis was told that his call was the first call reporting the fire. “He was really upset that no one called and they were only worried about filming it,” said daughter, Michelle Alonzo Cazares.

Cazares said that the van was the vehicle he used every day and so many of his belonging were in there including, a family camera, some cash, food, tools and a first aid kit. She told Victor Valley News that her father serves on the Adelanto Little League Board. Through his service on the board, he does a lot to help them, and he helps other people with hauling and towing done using his van. She said that Gaddis also sleeps in his van with her 15-year-old brother, who is in travel ball since hotel stays during these games is more costly than what the family can afford.

The family are long-time Adelanto residents, living there for 25 years. Cazares said that her father uses his van for so much including helping with her three children, including her child with Autism. The family has started a go fund me account, hoping to help Gaddis, who has helped so many, replace his van.