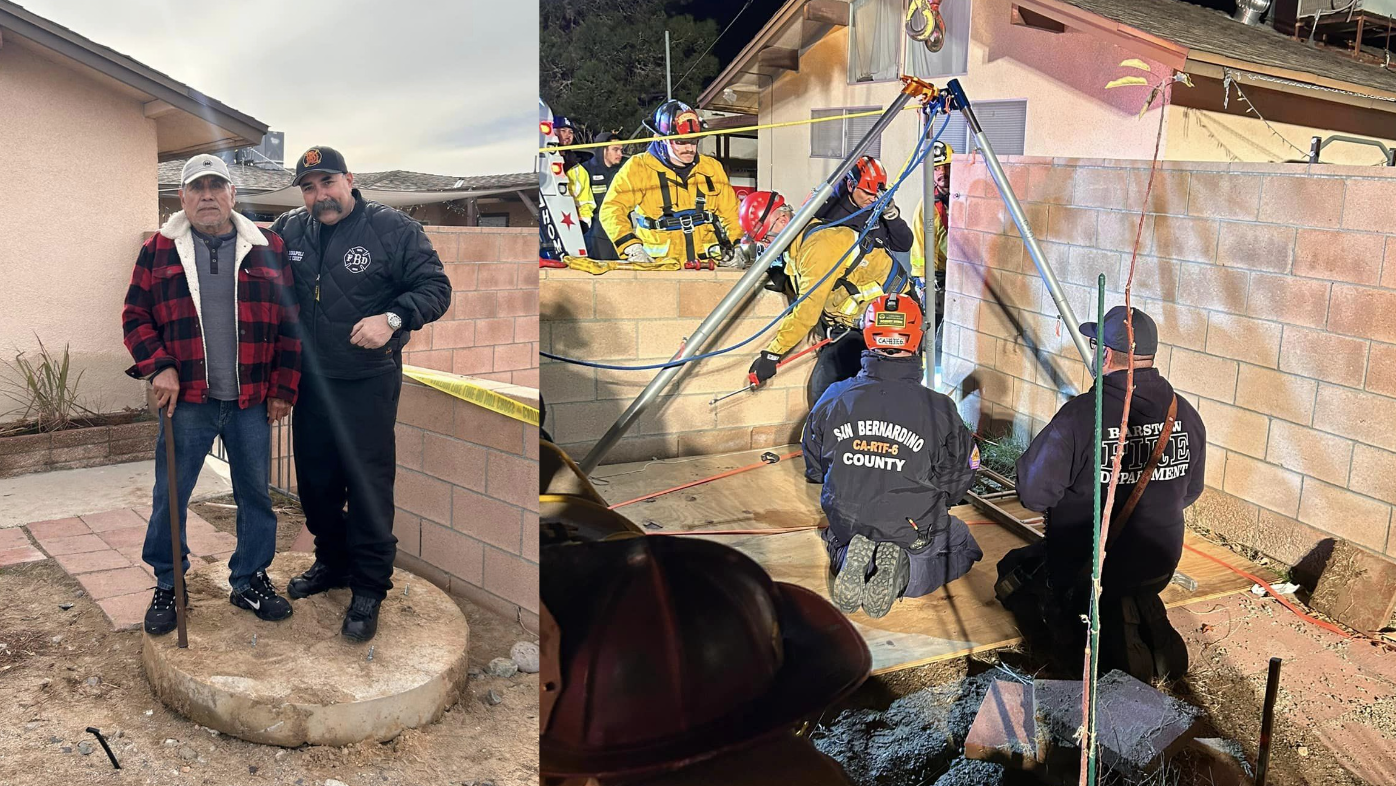 BARSTOW, Calif. (VVNG.com) — An elderly Barstow man was rescued from a dry well after he fell inside and was trapped for nearly 12 hours.

On January 12 at approximately 5:38 pm Barstow Fire Department received a call for a fall victim, in the area of Colby Avenue and Exeter Street in North Barstow.

The first engine arrived and confirmed the adult male approximately 73 years of age was trapped in an abandoned dry well nearly 22 feet below ground.

According to a news release from the Barstow Police Department, “adding to the intensity of the situation, there was an approximately 2,500lbs concrete cover that fell into the opening of the hole approximately 10 feet below the surface. The positioning of the cover entombed the victim who was an additional 12 feet below it.”

The crew of Medic Engine 361 was able to communicate with the victim but was unable to visualize him due to the unstable ground around the hole and requested additional resources to respond to the scene.

A tow truck from American Towing responded and was instrumental in the rescue by providing a heavy wrecker for hoisting, officials said.

Crews immediately began air monitoring of the confined space and were able to lower water and a flashlight to the victim while a plan was formulated to extricate him. A Barstow firefighter was then lowered into the hole to stabilize and secure the lid from potentially falling on the victim.

It took crews nearly 6 hours to remove the concrete lid from the hole which then enabled the victim, after being trapped for nearly 12 hours, to climb a ladder over 22 feet to safety. Once extracted, the victim was placed under the care of Barstow Fire Paramedics and transported by Desert Ambulance to Barstow Hospital for further evaluation and treatment.

“This outcome came from the collaborative efforts of all agencies involved” said Fire Chief Nick DiNapoli. “It was a complicated extraction, and we are all very pleased it ended the way it did.”

It was later learned that the victim went to check on a family home when he fell in the hole at approximately 11:00 am. The family became concerned when he did not return home which prompted the 911 call.

The victim was released from the hospital and is home resting comfortably with family.

“I’m just proud of the initial actions of ME361 getting the correct resources that were needed to help save this man’s life,” DiNapoli said. He added, “People often forget in these situations how important it is to communicate with the family of the victim. It was important to us to make sure they were informed every step of the way.”