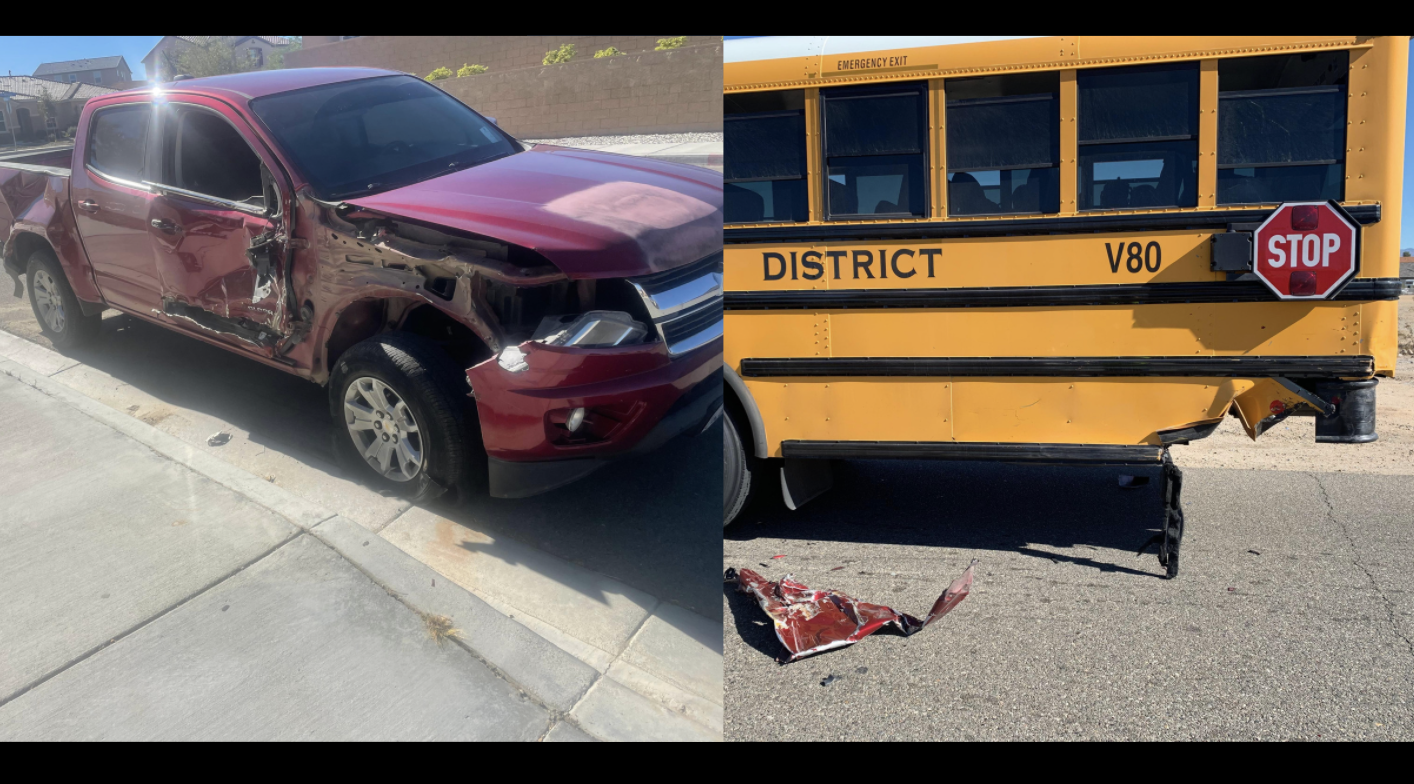 VICTORVILLE, Calif. (VVNG.com) — A Victorville man arrested for DUI, hit-and-run, and reckless driving, after crashing into an occupied school bus was cited and released, according to booking logs.

It happened at about 2:17 pm, on October 29, 2021, in the area of Ferndale and Tigertail Street and involved a red Chevy Colorado and a First Student company bus that was occupied with twelve students enrolled in kinder- 6th grade.

Bus driver Cindy Schindewolf and bus monitor Wendy Villatoro had just finished unloading a group of students and were back on the bus preparing to continue on with their scheduled route.

“As I went to take a seat in the back of the bus next to the students I looked in the rear window of the bus and saw this man going extremely fast headed towards our bus,” stated Wendy.

Wendy said everything happened so quickly and instead of going straight into the rear of the bus the truck swerved and hit the rear driver side corner of the bus.

“It sounded like a huge explosion. Truck parts went flying, dust, smoke or dirt was also flying and I got up and instantly checked on all the kids on the bus,” stated Wendy.

Wendy said after the impact the guy who hit them continued driving and was all over the road. A UPS driver who witnessed the commotion followed the truck and found it parked near a house on Yosemite Street.

The UPS driver returned back to the scene of the accident and provided Wendy with photos’ of the suspect’s truck and location. Wendy said it took a couple of hours for a deputy to show up at his home to do a breathalyzer test.

According to public arrest records, Brian Sergio Moreno, 29, a resident of Victorville, was arrested on Yosemite Street at 4:04 pm by a California Highway Patrol officer. He was cited and released at 8:15 am the following day.

After learning the suspect was no longer in custody Wendy said it’s not fair and broke down in tears. “Those poor babies on the bus and he gets a slap on the hand,” she stated.

Wendy said they are all so blessed to be ok and alive but she feels the driver won’t learn much since he “basically got to walk away”.