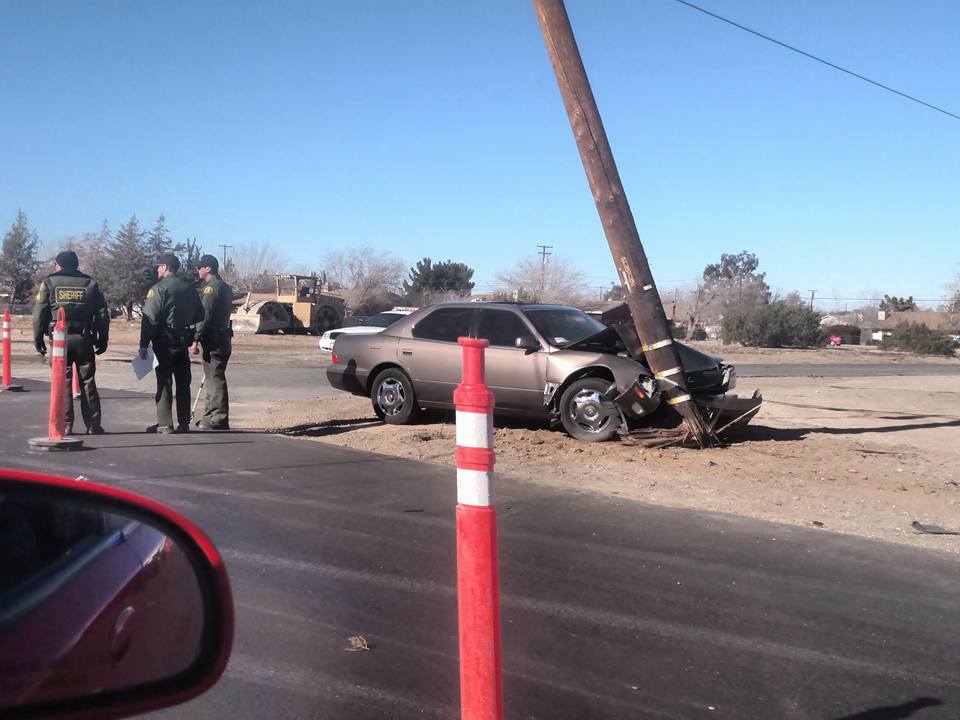 HESPERIA-(VVNG.com):  On Saturday, December 26th a Hesperia Station deputy was alerted to a stolen vehicle in the area of Smoketree Street and 9th Avenue after receiving a lojack hit.  Per scanner traffic, the deputy called for backup due to the signal he was receiving becoming unsteady.

A second deputy arrived on scene locating the vehicle, reported to be a 1999 Lexus that was stolen from Apple Valley on Saturday morning.  The deputy then followed the vehicle westbound on Main Street toward Cottonwood Avenue. The patrol car attempted to conduct a traffic stop of the vehicle as it turned northbound on Maple Avenue, but the vehicle failed to yield turning northbound on Oakwood Avenue. The vehicle continued on at a high rate of speed through a business parking lot returning to Main Street at speeds in excess of 70 miles per hour.

Upon attempting to make a left turn on Oakwood Avenue, the vehicle lost control, went over the curb and collide into a telephone pole. Although the telephone pole and vehicle sustained major damage the driver exited the vehicle and attempted to flee on foot east on Main Street. He was taken into custody shortly after.

The number 2 west bound lane of Main Street was closed to traffic until SCE responders could ensure the safety of the power lines. The suspect was treated at a local hospital for minor injuries as a result of the collision and later booked at the High Desert Detention Center in Adelanto for felony evading, possession of stolen property and fleeing the scene of an accident.

Apple Valley Station deputies are conducting follow up to the theft of the vehicle circumstances which occurred in their area. No customers reported any outages due to the incident.