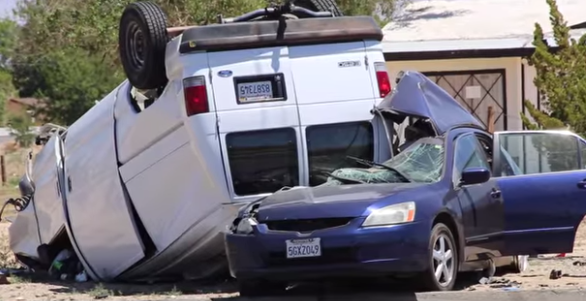 HESPERIA-(VVNG.com):  The family of five all killed in a 2014 mother’s day collision is not something that anyone will soon forget. The heart-wrenching loss of a mother, father and three small children on their way to Disneyland for the 5th birthday celebration for one of their children.

Angelica (Angie) the mother of the three children just celebrated her 25th birthday days before the collision. Her children, Freddy, age 9, Cynthia, age 4 and Ivan, age 2 also lost their lives that morning as well as her boyfriend 30-year-old, Gerardo Jimenez

Nearly a year later, the delivery van driver that crashed into the Honda Accord, identified as Joshua Smith, is being charged with five counts of misdemeanor vehicular manslaughter without negligence. The fatal traffic collision occurred on May 11, 2014 just before 7:00 am on Balsam Ave at Main Street in the city of Hesperia.

Sgt. Hubbard explained, “we do believe that the Honda car was traveling south on Balsam. Had stopped at the stop sign to that intersects with Main Street and then for unknown reasons the white delivery van who was traveling eastbound on Main Street crossed over into the westbound lanes up on to the sidewalk and then the collision occurred at that intersection of Main and Balsam. The driver of the delivery van did not receive any injuries as a result of the collision.”

The cause of the collision was later determined to be the driver falling asleep at the wheel due to prescription drug use. At this time it is unknown if the medication found in the toxicology report was prescribed to Smith. At this time there is no court date set and Smith remains out of custody. If Smith is convicted of all his charges he can be sentenced up to 5 years in state prison.