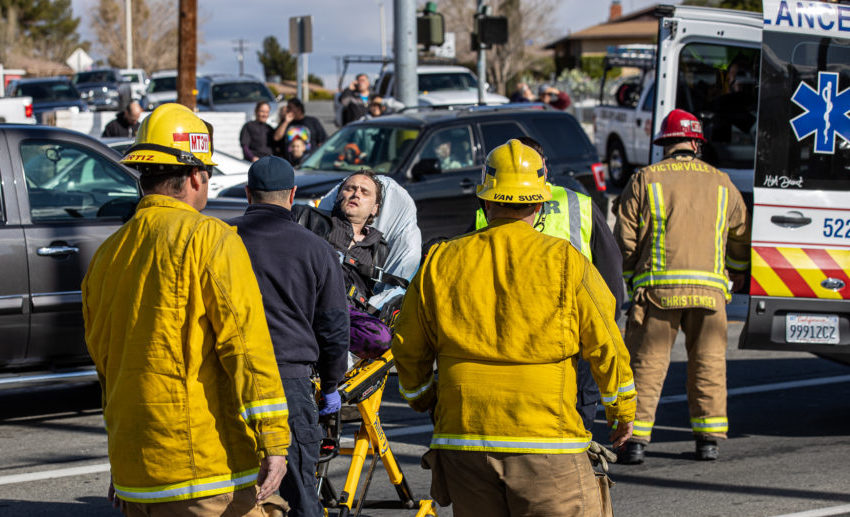 VICTORVILLE, Calif. (VVNG.com) — A 32-year-old man who crashed into a Victorville Elementary School District bus carrying children was arrested after he fled from the scene.

It happened at about 2:00 pm., on Monday, March 2, 2020, at the intersection of Hesperia Road and Cherry Hill Drive in Victorville.

The school bus which was occupied by the driver and three children was traveling westbound on Cherry Hill Road and attempting to turn left onto Hesperia Road.

Sheriff’s spokeswoman Mara Rodriguez told Victor Valley News the driver of a dark-blue 2013 Toyota Corolla ran the red light and collided with the bus and the vehicle stopped after crashing into a power pole.

“The male driver fled the scene, running into a nearby apartment complex. He was followed by witnesses and taken into custody by deputies,” stated Rodriguez.

The suspect, identified as Andrew Bryce Billingsley, was located at his home shortly after the collision, officials said. He was returned to the scene where he was interviewed by California Highway Patrol Officers.

One student from the bus sustained minor injuries and was transported to a local hospital as a precaution.

A witnesses who spoke to VVNG and said right after the crash, the male driver started frantically removing items from the vehicle before he took off running towards a nearby apartment complex. “I thought about tackling him but I wasn’t sure if he had a gun,” stated the male witness who did not want to be identified.

CHP Officer Mike Mumford said Billingsley was off his schizophrenia medication and the suspect would be booked on suspicion of hit-and-run.

An ambulance was requested for the suspect who had a laceration to his head.

The Victorville California Highway Patrol is handling the investigation. Anyone with information is asked to call 760-241-1186.