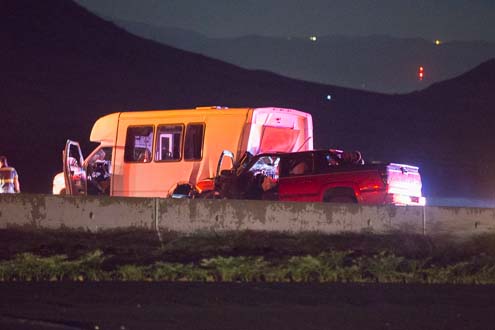 At about 8:30 p.m. on August 13th, a transit bus stalled in the no.2 lane on the freeway between Stoddard Wells Road and Dale Evans Parkway.

Moments later, a Chevy Avalanche slammed into the rear of the 25 passenger transit bus.

Per scanner traffic, a total of 12 passengers were transported by ground ambulances to various hospitals.

The crash momentarily shut down all lanes of traffic. Many of the motorists on the 15 freeway opted to turn off their vehicles and just wait outside their vehicles while waiting for the crash to be cleared.

CHP remains at the scene investigating the crash. Information will be updated as it becomes available.