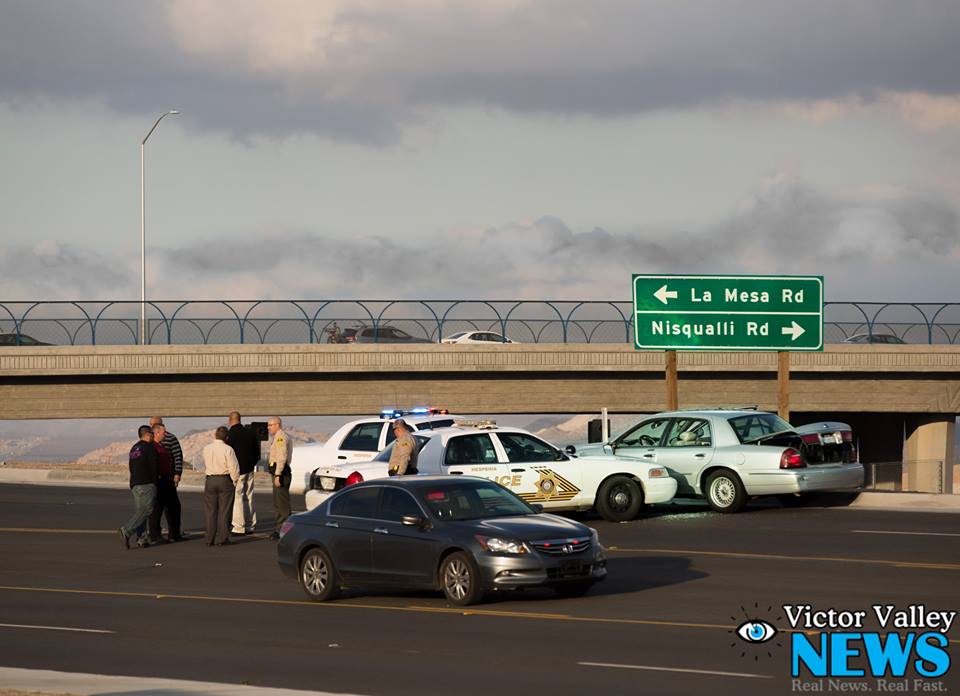 HESPERIA-(VVNG.com):  A domestic disturbance call in the 15000 block of Manzanita Street at approximately 3:15 P.M., on Tuesday, January 27th lead to a high-speed chase through Hesperia and parts of Victorville.

Deputies were en route to respond to the domestic disturbance call when officers in a nearby CHP helicopter witnessed a male subject getting into a silver sedan. The vehicle, later to be determined stolen from a family member of the suspect, was seen driving erratically through the nearby Hesperia streets.

Deputies, located and attempted to stop the speeding vehicle, but the driver failed to yield leading to the late afternoon pursuit.

The pursuit reached high speeds, at times over 80 miles per hour, causing three collisions along the way. The three collisions fortunately caused no injuries.  The suspect was detained near Amargosa Road and La Mesa Road at 3:47 P.M., after the deputies used the Pursuit Intervention Technique (PIT) maneuver.

Use of the PIT maneuver was successful, the suspect, later identified as 36-year-old Hesperia Resident, Corey Wayne Townley, regained control of the vehicle, while doing so hitting the sheriff vehicle and proceeding to flee on foot.

The foot pursuit was ended shortly after when Townley was detained after a brief struggle.

Townley sustained minor injuries and was transported by ambulance to a local hospital for treatment. He was then released and taken to Adelanto Detention Center where he is being held in lieu of $100,000 bail. Townley is scheduled for arraignment on Thursday, January 29th on charges of reckless driving and evading a Peace Officer, assault with a deadly weapon, and vehicle theft. The suspect has previous convictions including unlawful sexual intercourse with a minor more than 3 years younger, possession of a controlled substance, and inflicting corporal injury on a spouse or cohabitant.