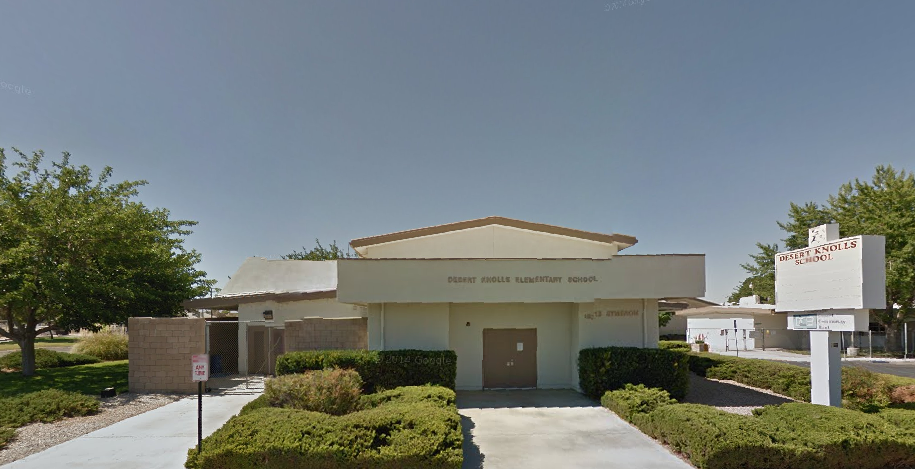 APPLE VALLEY – (VVNG.com)- Desert Knolls Elementary School was placed on a lockdown in the afternoon on Thursday, October 23rd when the school received information of a possible shooting. The information, which was later found to be incorrect ,came from the mother of a student that drove by an arrest being made, she believed she had seen an altercation down the street from the school where she had thought someone may have been shot and injured.

The relayed information somehow lead some school officials to believe that the shooting was on campus. Apple Valley deputies responded to the school campus and following further investigation realized it was about an earlier incident where there was a warrant arrest on the 18000 block of Symeron Road.
The arrest on Symmeron Road occurred at 1:49 p.m. when deputies from the Sheriff’s Specialized Enforcement Division along with deputies from the Apple Valley Police Stations Gang unit went to the 18000 block of Symeron Road to arrest Blaze Weaver, 42, who was wanted for outstanding warrants. Upon arrival deputies located and attempted to make contact with Weaver, who was inside a black Mercury Mountaineer. The suspect attempted to leave and as he backed out he struck the unmarked Sheriff’s vehicle.

The suspect was taken down at gunpoint without further incident. According to authorities, the mother had been driving by on her way to Desert Knolls Elementary School, noticed the man being taken down by plain clothes officers and reported what she had seen when she arrived at the school. The suspect was booked into High Desert Detention Center for PC245.