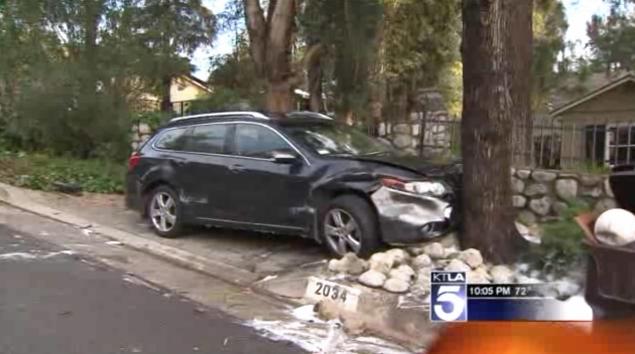 LA CANADA FLINTRIDGE: On Sunday, March 9, at approximately 2:49 p.m., a two-vehicle traffic collision occurred on the 2000 block of Los Amigos Street in La Canada Flintridge. The drivers, a 51 year-old and 17 year-old female, both residents of La Canada Flintridge, exited their vehicles to exchange information.

Suddenly, a swarm of bees that were disturbed from one of the vehicles striking a tree, attacked both women. The 51 year-old, fearing for her life, ran to the rear of a residence where she jumped into a swimming pool, while the 17 year-old fell to the street.

The first deputy to arrive saw the 17 year-old on the ground covered in bees, and used his fire extinguisher to remove the bees from her body. He assisted her to her feet and they both ran to safety. The deputy then used the hose from a nearby residence to remove the rest of the bees from the teen.

The LA County Fire Department arrived and rescued the second victim from the pool which was swarmed with bees. Both victims suffered at least hundreds of bee stings each and were transported to a local hospital for treatment.

An assisting deputy was also stung by the bees but did not require hospital treatment.

The bee hive was removed by a local pest control company.