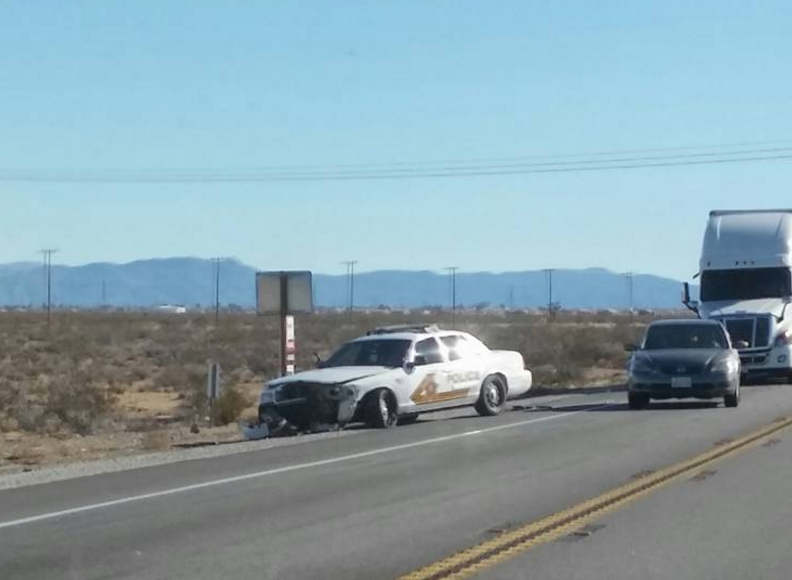 ADELANTO-(VVNG.com): At 1:55 p.m. on Tuesday afternoon, deputies from the Victor Valley Station were dispatched to an officer involved traffic collision on Highway 395 between Rancho and Adelanto Roads. San Bernardino County Sheriff’s Spokeswoman, Pam Hoffman said, “The deputy was responding lights and sirens to a call.”

The collision involved the patrol vehicle and a semi-truck on the southbound lanes of Highway 395. Unconfirmed reports state that the deputy was enroute to a medical aid call in reference to an infant that was not breathing when the patrol vehicle collided into the back of the semi-truck.

“When was driving by I saw the deputy and the truck driver both were ok. They were checking the back of the truck where it was hit.  I don’t know exactly how it happened, but the truck was in front of the car,” said Raul Compean, on a Victor Valley News Facebook group post.

There were no injuries reported as a result of the collision. The damage to the semi-truck was reported to minimal and the patrol vehicle sustained what appeared to be moderate damage. Highway 395 is closed for the investigation. The closure, according to sheriff’s officials is  from Adelanto Road to Rancho Road. Traffic will be diverted to Adelanto Road through the remainder of the investigation.

The duration of the closure is unknown at this time. Information will be updated as it is received.