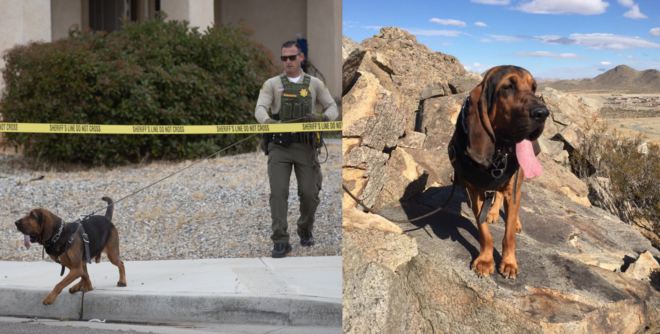 VICTORVILLE, Calif. (VVNG.com) — K9 Raider and his handler Deputy Antonio Higuera received praise for their role in the community.

The 6-legged team has been partnered together since Raider was sworn-in on February 3, 2016. K9 Raider is trained in tracking and trailing. The duo is fundamental in locating missing persons and suspects.

Earlier this month, The SBCSD Barstow Station and Barstow CHP requested Deputy Raider and Deputy Higuera to assist in tracking down a suspect who had led deputies on a pursuit and then fled on foot.

“Raider quickly acquired a scent and tracked approximately 400 yards, locating the suspect who had buried himself under some debris,” stated Rodriguez.

The 27-year-old suspect, Daniel Allen of Los Angeles was arrested for a hit-and-run, being in possession of a controlled substance, and other charges.

If the partners aren’t tracking down criminals, they can be found visiting schools and building a positive community bond.

Deputy Higuera and K9 Raider initially completed training that consisted of running trails in both rural and urban areas.

“The initial training process is long and arduous but the skills acquired by the deputy and canine are priceless. Raider continues to learn and hone his skills on a continuous basis and the citizens of Victorville and all of San Bernardino County benefit,” the Spokeswoman told Victor Valley News.