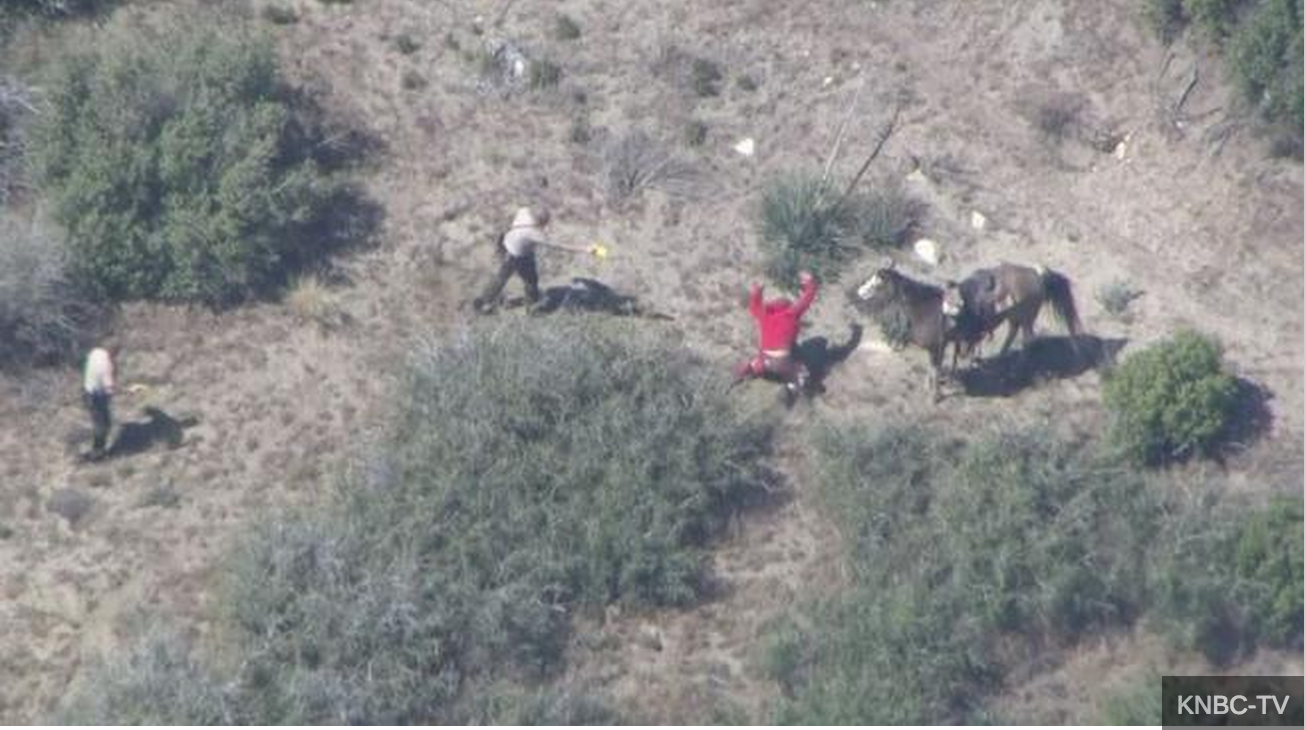 APPLE VALLEY– (VVNG.com): On April 9th at approximately 12:15 P.M., San Bernardino County Sheriff’s deputies attempted to serve a search warrant at the home of an Apple Valley man. At approximately 12:20 P.M., the man ran from the home and into a blue Dodge Intrepid leading deputies on a pursuit that initiated in the area of Laguna Seca Drive and Standing Rock Road.

The pursuit continued down the unincorporated city streets in the Town of Apple Valley, eventually leading deputies to the Deep Creek area at approximately 12:50 P.M.  The suspect pulled over continuing the pursuit on foot. Deputies continued to follow the suspect both on foot and on dirt bikes. At some point during the foot pursuit the suspect gained access to a brown saddled horse.

A Sheriff’s helicopter was called on scene to assist in the pursuit with aerial support. The white adult male was described to be wearing a red jacket, and red riding pants.

During the course of the pursuit, three officers were reported down, one with dehydration, one reported not being able to feel his feet and legs and the last with chest pain and difficulty breathing. After searching the area for some time the helicopters located the three deputies and render aid.

Per scanner traffic,  two deputies were airlifted two to an area trauma center for treatment. The dehydrated officer was given water at the scene in order to rehydrate him.

While on the horse the suspect continued to move away from deputies who were trying to get closer. The suspect was not compliant with officers commands.

At 2:50 P.M., the suspect was taken into custody after falling from the horse. As the pursuit came to an end a media helicopter was overhead. According to news reports from NBC 4, “Aerial footage showed a group of up to five sheriff’s deputies appearing to kick the man who was on the ground”.

The deputies also requested aid for the suspect, who in their words was not ambulatory. He was airlifted for treatment of unknown injuries. No further information is available at this time, information will be updated as it is received.