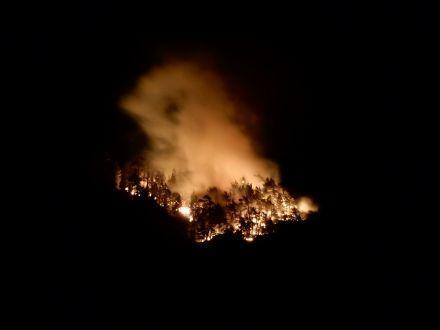 Reported shortly after 8:40 p.m. Sunday evening, the Delamar Fire was visible to residents and visitors in the Big Bear Lake area. Firefighters responded to Delamar Mountain north of Fawnskin, CA and were able to stop the fire’s growth by daybreak.

Night flight aircraft were used in conjunction with fire engines and hand crews to limit the fire to 15 acres. By 8 a.m. Monday, the fire was 50% contained. There were no immediate threats to private property. Highway closures and evacuations were not necessary. At the peak, over 220 firefighters from the US Forest Service, San Bernardino County, Bear Lake Fire Authority and CALFIRE were assigned to the fire.

Forest roads in the immediate fire area have been closed to provide safe access for firefighting equipment. The Cougar Crest Trail is closed, as well as the Pacific Crest Trail between Forest Roads 3N14 and 3N09.

At this time the cause of the fire remains under investigation.