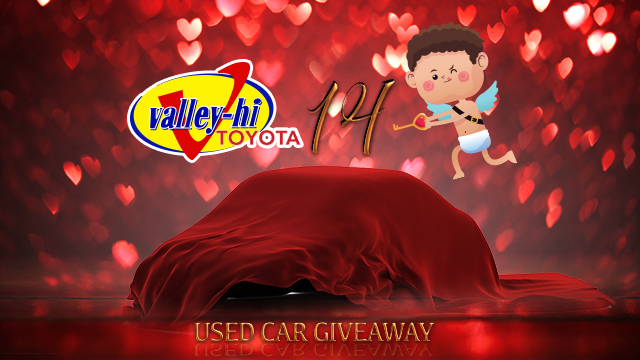 VICTORVILLE, Calif.(VVNG.com) – The month of February is about Love and President’s Day car sales. Valley Hi Toyota will be much involved in both. “We love the fact that there is so much community participation during our Used Car Giveaways that we wanted to kick off Valentine’s with a major announcement,” says Todd Stokes, General Manager at Valley Hi Toyota. “As a matter of fact, I was telling Brian (Social Media Marketing Manager) that we need to give even more cars away this year!”

The Victorville dealership admittedly stated that they were disappointed with only giving away three vehicles in 2016. “I think I put so much effort in the process, that it really stretched out the length of the contests- which left little time to prepare for the next one. I promise this first giveaway of 2017 will be much simpler to enter!” Ortega stated. Contestants are encouraged to Like Valley Hi Toyota on Facebook and set notifications. Here’s a video to learn how:

Their new state-of-the-art dealership is expected to be completed by early Summer 2017. “We want to keep our community excited. That’s why it’s imperative that we keep these contests and giveaways going,” continues Stokes, “we’re even looking to team up with local causes and non-profits to make an even greater impact in the High Desert.”

President’s Day sales bring even more savings during the month of February. This year, Brian was asked to participate in the new local commercials, replacing the talking Toyotas. “I hope people will enjoy the spots as they roll out. Todd and myself enjoy continuing our banter on the small screen- the same way we have on our Facebook Live posts,” says Ortega. Watch a sneak peak of George Washingtodd and Abrianham Lincoln spot here:

“Our goal of course is to sell more new and pre-owned vehicles, but who says car commercials can’t be fun?!”

Valley Hi Toyota is committed to the reaching out to the local community. Throughout the years they have made social media a place to hang out as well as announce giveaways, contests, specials, and community involvement- such as delivering 25 turkeys to High Desert Homeless Services (see article here). The Facebook Live announcement of Used Car Giveaway 14 will take place on February 1st at 1pm. It is not necessary to watch live in order to compete to win the vehicle.