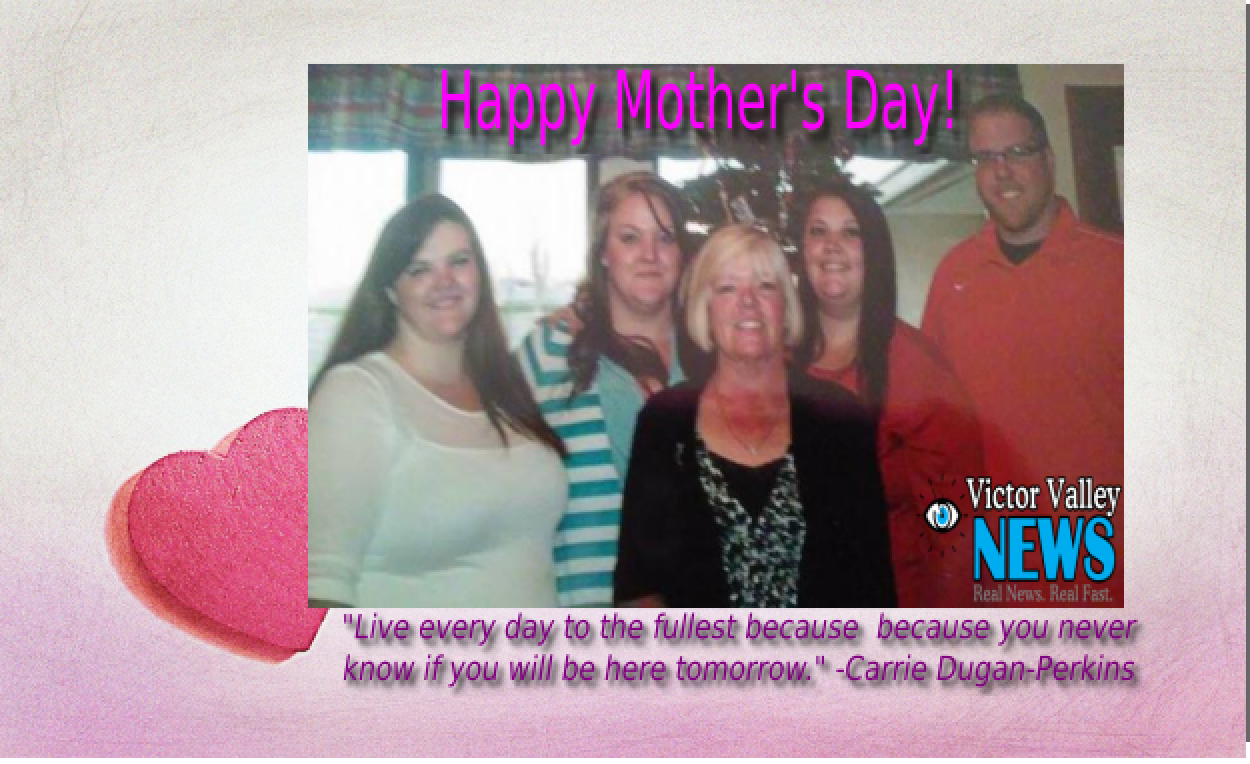 VICTORVILLE-(VVNG.com):  Mother’s Day comes only one time a year, it’s the one special day that we choose to tell our mother just how much she is loved.

Helendale resident, Kayla Lukey will also be spending this special day honoring her mother, Carrie Dugan-Perkins who is fighting terminal brain cancer. Victor Valley News was made aware of Kayla and Carrie through the entry submission comment on a Valley Hi Toyota Mother’s Day contest.

Carrie, a now 55-year-old U.S. Airforce Veteran went to Barstow Community Hospital in October of 2014 thinking she had a hernia but left knowing that there was a possibility that she had ovarian cancer. On January 5, 2015, she underwent a complete hysterectomy and the tumor was later found to be cancer. Carrie promised herself and her children that she would not ever stop fighting.

Soon after being diagnosed with Stage 3c Ovarian cancer Carrie went through 6 rounds of Chemotherapy in Newport Beach, California. During that time, her son lived in Newport beach where she would stay overnight before her Chemotherapy treatments. The treatments were believed to be successful in fighting ovarian cancer upon completion.

In January 2016, Carrie went to the doctor for a routine PET scan as part of her Post Cancer follow-up. The scan located numerous tumors in her brain. These tumors varied in size; some small, some medium in size and one large one. In order to extend her life, Carrie went through radiation treatment. Carrie said that the radiation made her sick, made her lose her hair, left her unable to drive and caused memory problems. “She sometimes could not think of the words to use to complete her sentence, it was kind of like helping a small child fill in the words,” said Kayla.

Several weeks after radiation her condition improved and her memory began to come back. The radiation caused numerous side effects, including lymphedema in one leg, causing it to swell to around three times the size of her other leg. It also caused neuropathy, making it difficult for her to sleep due to the “pins and needles” feeling. After 15 rounds of radiation, several tumors disappeared, some shrunk in size, but the large one remained unchanged. Carrie now faces chemotherapy again starting Tuesday, May 10th in Newport Beach.

Kayla said she will be taking her mother to all her chemotherapy appointments and being there with her every step of the process. She said that her younger sister supports her mother financially since Carrie is unable to work.

“We help clean up her house, do her laundry and take her to chemotherapy. We never feel like we could ever repay her for all that she has done for us,” said Kayla. “She is so independent, she taught us how to be independent and not have to rely on anyone. She was always the mom, the dad, the maid and even the plumber growing up.”

Kayla described her mom as a woman that always has taken care of everyone before herself. She said that she is always there at the drop of a dime when needed. She never asked and still never asks anyone for anything. “We never had a lot of money, but whenever she had money it always went to us, kids. We were always so handled and that is why we love taking care of her now.”

Carrie said that her children are her biggest accomplishment in life. She said that growing up as a foster child she made a vow to herself that she would not have children until she was mentally ready to do so. “I love my kids with all my heart, I would do anything for any one of them,” said Carrie.

She raised a son and three daughters, including a stepdaughter who are now 21 to 26 years old. Kayla also has two sons who Carrie says that she adores. Carrie said she wants to be remembered for the way that she has always cared for a treated her children. She said she wants her special friends that have always been there for her that she loves them like sisters.

Carries enjoys spending time with her family, traveling, reading, doing crossword puzzles and enjoys sitting outside under a tree. The radiation and chemo will only extend her life, but Carrie has many things she wants to do with her family while she is here. “I want to take a drive up the coast to San Francisco with my girls and grandbabies,” said Carrie.

Of course, in the eyes of many Victor Valley residents and the Valley Hi Toyota staff, Kayla and Carrie were the obvious choices for the Valley Hi Toyota Bella Mia Ultimate Mother’s Day Spa package. Kayla said that she and her mom cried, screamed and jumped up and down because Carrie really needed the special gift. Kayla wants to remind everyone to express love to your mother even when it is not Mother’s Day. “Every minute counts, because time flys by faster than you think,” said Kayla. “Laugh like sisters and love like mother & daughter.”

Kayla has started a Go Fund Me Account to help raise money to pay for her mother’s medical related expenses and help fill her mother’s bucket list. When asked what she has learned in her life, Carrie said, “Never take anything for granted and live every day to the fullest because you never know if you will be here tomorrow.”

Burglary Suspects Flee on Foot After Getting U-Haul Stuck