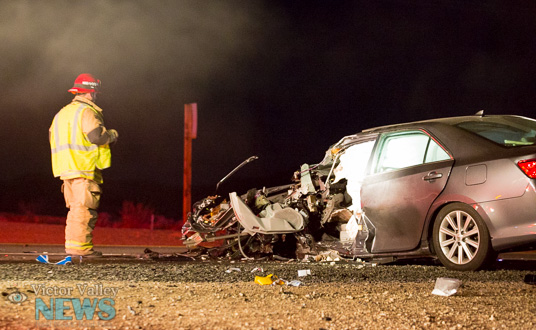 ADELANTO:(VVNG.com)- A portion of US Highway 395 remains shut down in both directions following a major injury traffic collision involving a Toyota Camry and a tractor-trailer. The collision was reported on Friday, November 27, 2015 at 10:43 p.m., on Highway 395 near mile marker 22 just north of Sierra Road.

Per scanner traffic, a female was trapped inside the sedan and reported to be unconscious and unknown if she was breathing. Upon arrival, first responders used the jaws of life to extricate the female driver from the vehicle. San Bernardino County Fire requested an air ambulance to transport the patient but was later cancelled.

A second male passenger inside the vehicle was transported by ground ambulance with non life threatening injuries.

According to the California Highway Patrol incident logs, the collision has been changed from a traffic collision to a fatality.

Victor Valley News reporters spoke with the passenger inside of the semi involved in the collision. He stated, he and his father were traveling southbound on Highway 395 heading to Los Angeles from Fresno. He stated that the Camry crossed over the double yellow lines and directly into the path of the semi. Neither of the occupants in the semi were injured.

This portion of Highway 395 in San Bernardino County between Interstate 15 and the city of Adelanto has been previously dubbed “Blood Alley”. This dangerous stretch of roadway has claimed the lives of hundreds over the past decades. The only thing separating the cars traveling in opposite directions is yellow paint in the middle of the roadway. The number of roadside memorials on this stretch of highway have been growing at an alarming rate.