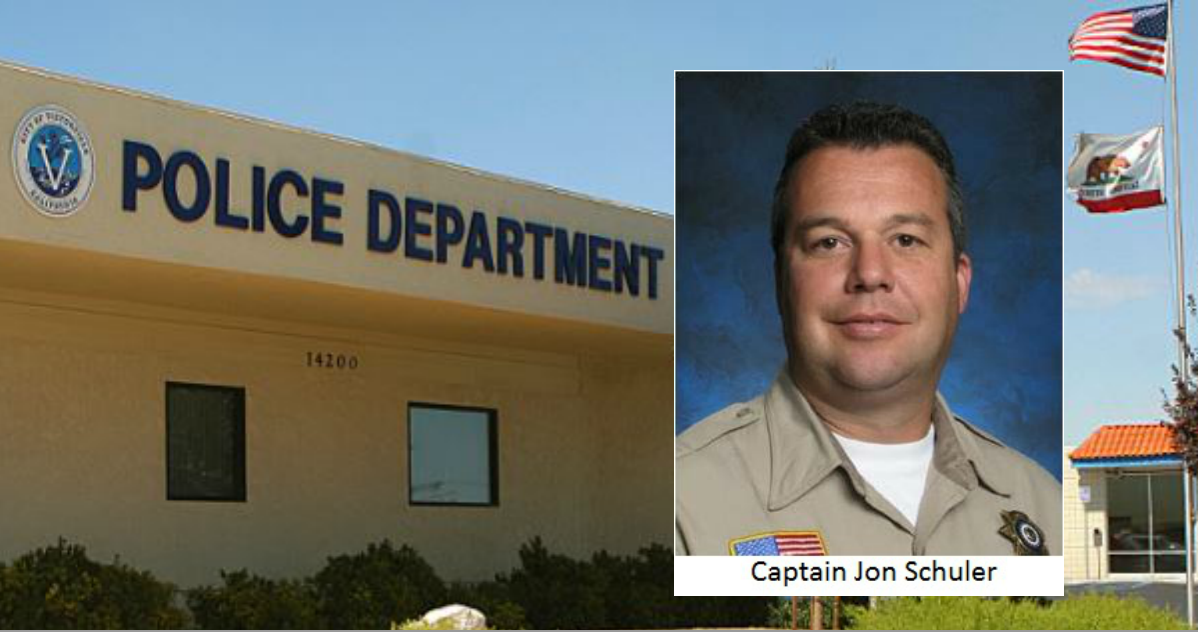 VICTORVILLE – On January 21, 2017, Captain Jon Schuler, a 28-year veteran of the San Bernardino County Sheriff’s Department, will officially take the helm at the Victorville Police Department. For the last four years Captain Sam Lucia has been the Commander of the Victorville Station. His new assignment with be as the Captain of the Employee Resources Division for the Sheriff’s Department.

Captain Lucia has forged many solid relationships within the City of Victorville and will not soon be forgotten. “Sam is a very talented Police Captain who served Victorville well, and we are sad to see him go. It was only a matter of time that someone with his talent would be promoted by the Sheriff’s Department,” said Victorville Mayor, Gloria Garcia. “We welcome Captain Schuler and look forward to working with him.”

Captain Schuler will transition to the Victorville Station from his current assignment, at High Desert Detention Center, where he has served as Captain for the last nine months. “I’m very excited and looking forward to my new assignment,” said Captain Schuler. “The High Desert is a great place to live and work, and my assignment as Commander of the Victorville Station makes it that much better. I’ve lived in the High Desert since 1991, and have spent almost 8 years of my 28-year law enforcement career working at stations in the High Desert.” In 2007 Schuler was assigned to the Victorville Station as a Sergeant and held positions in Patrol, Traffic and the Major Enforcement Team. Some of his other assignments with the Sheriff’s Department have included Training, Criminal Intelligence, Technical Services, Dispatch and Records. “With the combined effort of dedicated employees and volunteers at the station and the city, I will work hard to provide the level of law enforcement service the community expects.”

Captain Lucia said, “In this business you get pretty used to moving around.” However, for Lucia who has lived in the High Desert most of his life, “Victorville Station accounted for more than 13 years with the Sheriff,” which is something he is proud of. “My transfer, although bittersweet, is a new and exciting chapter. I will be serving at another assignment, but I will continue to call Victorville home. I’m a firm believer that everything happens for a reason, nothing happens by chance. The assignments and people who’ve touched my life and have chosen me as a friend are part of that plan. To all of you in Victorville who chose me as a friend, know that you have taught me so much, thank you.” In regards to passing the torch to Captain Schuler, Lucia stated, “Victorville will be in good hands with incoming Captain, Jon Schuler. He’s a great guy with good experience, and he’s a local guy.”

The staff at the Victorville Station is excited to work with Captain Schuler and learn from the knowledge he has accumulated over the last 28 years. We would also like to wish Captain Lucia the best on his new adventure.