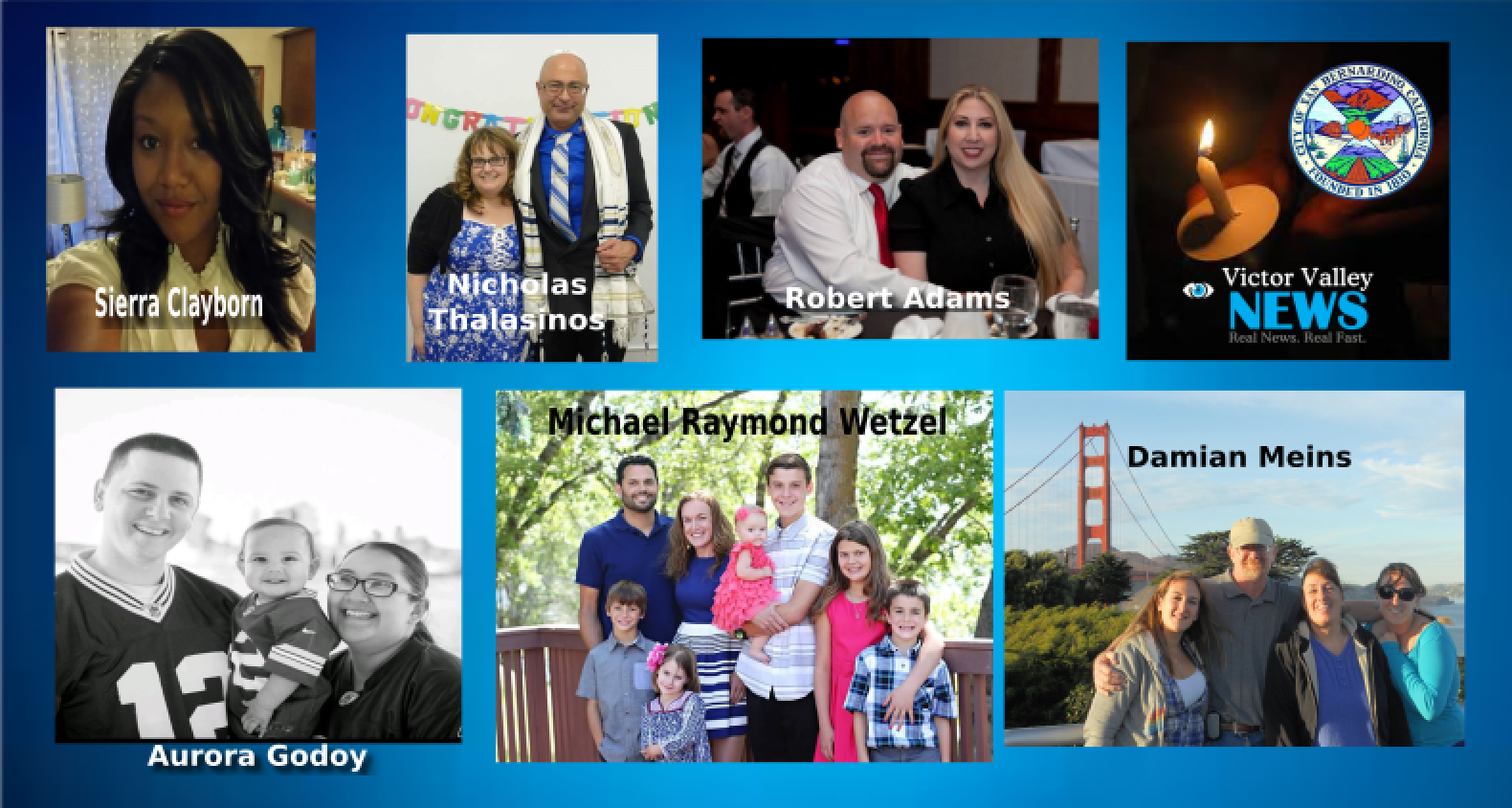 SAN BERNARDINO-(VVNG.com):  Fourteen were killed in the tragic Wednesday, December 2, 2015 shooting at the Inland Regional Center in San Bernardino. At about 11:00 a.m. masked gunmen entered the conference room where the San Bernardino County Health Department employees were having a holiday party.

Just before the shooting, 28-year-old Syed Farook a San Bernardino County Inspector quickly left the party just before they were to take a group photo.

After multiple shots were fired, blood covered the conference room floors and there was mass panic throughout the building. Witnesses described the sounds being those of a “war zone” as people hid in offices and quietly sent text messages to their loved ones. Minutes later, a witness saw three individuals getting into black Ford Expedition.

Fourteen individuals died and seventeen were wounded as a result of the shooting. At about 3:00 p.m. while following up on a tip authorities attempted to stop a vehicle in the Redlands area. The black Ford Expedition failed to yield, which caused a pursuit. Shots were fired from the suspect vehicle at the following officers and shots were returned by authorities.

The male suspect fled on foot and was fatally wounded, authorities located the second fatally wounded suspect, a female, 27-year-old Rafsheed Malik, the wife of Farook.  An additional unidentified person of interest was detained for questioning.

San Bernardino Police Department, and the San Bernardino County Sheriff-Coroner came together in unified command to investigate this horrific shooting where 14 people were murdered. The investigation as to the identity of the victims as well as family notifications were made by the Coroner Division on Thursday morning. At 3:30 p.m. all notification were complete.

“This shooting has caused each victims family, friends and co-workers, along with the first responders, to suffer an enormous personal tragedy. We must stand strong and offer support to each individual affected by this senseless attack”, stated Sheriff John McMahon.

Sup. Josie Gonzales, said in a statement, “The residents of this County have endured time and time again, and despite this atrocity, our spirit and determination for life and liberty will not be broken. This community will not hide in our sorrow, we will not subdue to the face of fear; we will unite and strengthen our community identity. We will remain determined to exercise our freedoms, and we will resolve to remain courageous and fearless in the face of terror.”

I pray that moving forward we will clutch our loved ones tighter than we ever thought possible…that we will love and be loved more than ever, and that we will persevere with the unifying strength of our community,” added Sup. Josie Gonzales.