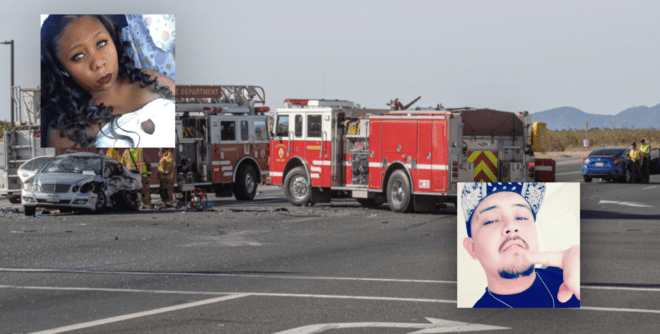 They found a 2018 blue Honda Civic with major front-end damage and a 2007 Mercedes Benz with extensive damage to the driver-side door.

The driver of a blue Honda, 28-year-old Ramiro Angulo, a resident of Victorville, was declared deceased at the scene at 7:08 a.m.

The driver of the silver 2007 Mercedes, 27-year-old, Erin Garybroaster, a resident of Victorville, was declared deceased at 7:12 a.m., the coroner’s website confirmed.

Deputies conducted an investigation and determined that Angulo was traveling southbound on US 395 Highway and Garybroaster was traveling eastbound on Luna Road when he entered the intersection on a red light, broadsiding the Mercedes.

An eyewitness told Victor Valley News that Angulo was fleeing the scene of a fender-bender on Palmdale Road and Highway 395 just moments before the deadly crash, according to a previous article.

A Mercy Air helicopter airlifted a female who was a passenger in the Mercedes, to a trauma center.

“The person who died is my sister, and her passenger is our mother who is fine and in recovery,” a family member posted as a comment on a Victor Valley News post on Instagram.

MAIT Investigators are continuing the investigation into the collision.

A sheriff’s news release provided limited details into the crash and did not say if drugs or alcohol are suspected to be a factor.

MAIT Investigators are continuing the investigation into the collision. Anyone with information is urged to contact Deputy A. Ramos or Deputy A. Hylin at the Victorville Station, (760)241-2911.