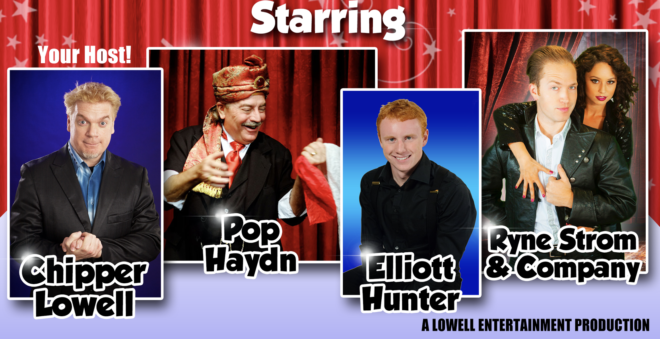 Sponsored by the Associated Student Body, this family-friendly show will include entertainment from a fantastic array of magicians, including comedy magician and host Chipper Lowell.

With an unusual blend of stand-up, improvisation and twisted visual magic, Lowell has twice been honored with “Comedy Magician of the Year!” by the International Magicians Society.

Whit “Pop” Haydn was named Stage Magician of the Year in 2015 at the famed Magic Castle in Hollywood. He has opened for Jerry Seinfeld and the Smothers Brothers and served as the chief magic consultant on Norman Jewison’s major film “Bogus,” starring Whoopi Goldberg.

Hunter is an international award-winning magician and sleight of hand artist. He has been seen performing on the Las Vegas Strip, under the Saint Louis Arch and even on NBC’s America’s Got Talent.

VVC promises a show unlike any you’ve seen before at An Evening of Comedy & Magic on January 18th, 2020. The show has sold out for the past 10 years, so make sure to get your tickets early!

Regular admission is $20 for adults, $15 for seniors and $10 for children. Tickets are available online at www.vvc.edu/tix or at the Ticket Office in the Student Activities Center (Bldg. 44) Monday through Thursday from 8:30 a.m. to 5 p.m.