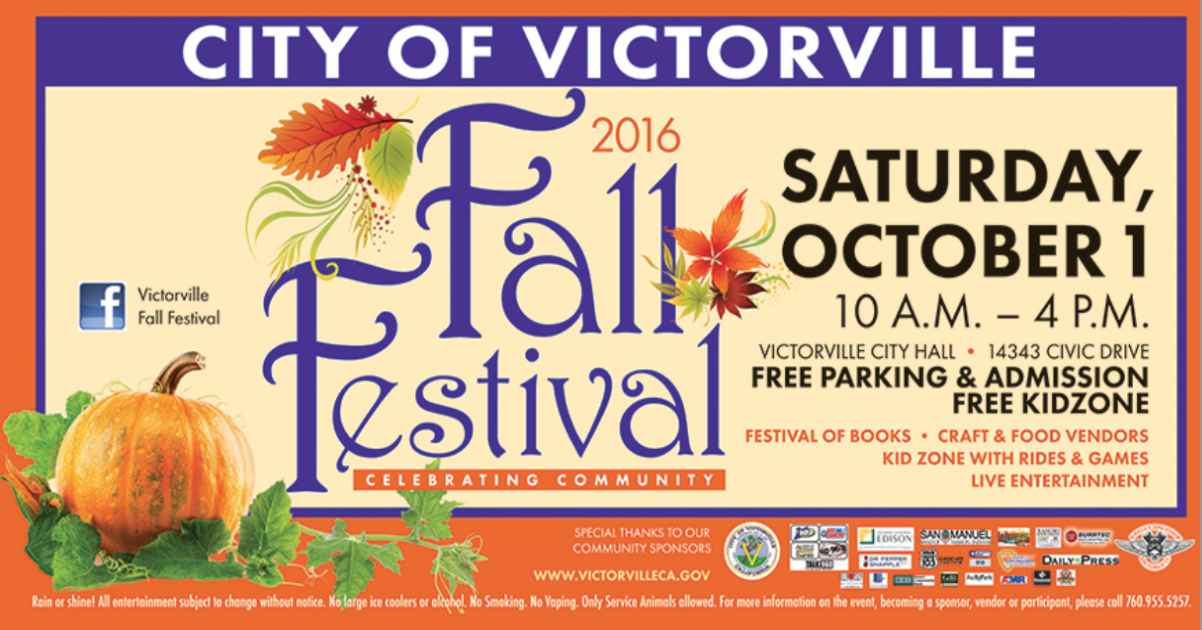 Victorville, Calif.— The City of Victorville will present the High Desert’s largest community festival of the year when it hosts its 15th Annual Fall Festival, this Saturday, Oct. 1 from 10 a.m. to 4 p.m. at Victorville City Hall. The City expects approximately 30,000 visitors to attend this family-oriented street fair that features two stages of live entertainment, children’s rides and activities, a Festival of Books, over 150 vendors and Poke Stops.

The event will kick off at 10 a.m. with the return of local rock band Impakt on the main stage. This group of local rockers has been performing together for five years and has played just about every club in the high desert, performing classic and southern rock, with some blues thrown in for good measure.

Y102 Radio personality Mychal Fabela will return as the event emcee and will be joined by fellow Y102 radio personalities Colleen Quinn, Preston Stone and Gregg Thomas as they will have giveaways throughout the event.

Long-time rock band Music Formula will present a free family concert on the main stage once again. Music Formula has been making a name for itself in the High Desert for nearly two decades. Their first CD, Roadhouse Resurrection, celebrates their influences and also showcases original tunes. This music is sure to get everyone up on the dance floor.

The City of Victorville and Platinum Sponsor, Harley Davidson Victorville, are proud to present The Blue Mountain Tribe on the main stage for the first time at the Fall Festival.

The Blue Mountain Tribe plays original blues rock music about Indigenous Americans, war veterans, people with disabilities, and riding Harleys, as well as songs about inspiration, love, desire, rage, pain, and the Blues. The Blue Mountain Tribe recently released their debut CD, “All Our Relations” which will be available for purchase during their performance.

The Kid Zone, sponsored by Southern California Edison and CBS Radio, The Route 103.1, will have plenty of free fun for the kiddos. For starters, the Kid Zone stage will feature live music and dance performances. There will be three bounce houses of various sizes, plus a swing chair ride and another ride called the “Tub of Fun.” The Kid Zone will have pony rides, a petting zoo, face painting, stage games, and much more!

About the City of Victorville Fall Festival: Occurring the first Saturday of October for the past 15 years, the City of Victorville Fall Festival has become one of the biggest and most well attended events in the High Desert. This one day street fair experience will be filled with music and dance performances from local entertainers, tasty food booths, hundreds of arts, crafts and merchandise vendors, education and service related information booths, plus FREE activities and rides for young children and the young at heart This event is always presented as a family friendly event with Free parking, Free admission, and a FREE Kid Zone!